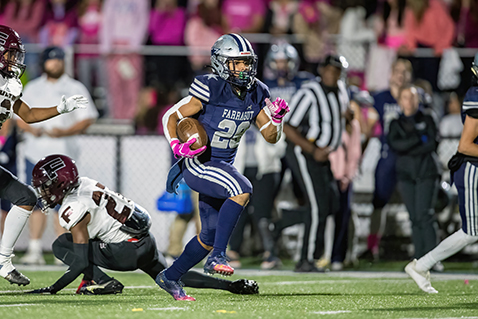 What early on looked like a game that might come down to who had the ball last turned out to be anything but.

On Senior Night at Bill Clabo Stadium, Farragut High School continued its offensive onslaught  and rolled to a 63-24 win over Fulton High School in a non-region game.

The Admirals’ sixth straight win improved their record to 7-2, and set up a huge road clash against archrival Bearden Thursday night to finish the regular season.

“I’m just proud of what these guys are doing,” said Farragut coach Eddie Courtney. “Our receivers are doing real well. It all starts with the offensive line. Those guys have gotten better every game. Now we’re running the ball and we’ve got good pass protection.”

Farragut needed all of 16 seconds to take a 7-0 lead when wide receiver Ashton Auker fielded the opening kickoff on the 10 and galloped 90 yards for the touchdown.

But the Falcons answered right back on their first possession when, on third and 10 from their own 40, quarterback Marcellus Jackson found receiver Daveon Shenault wide open for a 60-yard score.

Farragut made it 14-6 on its next possession when quarterback Luke Johnson hit Hank Devault for a 34-yard touchdown. The drive covered 97 yards in eight plays.

For the game, Johnson was eight of 12 for 110 yards and three touchdowns, all in the first half.

“Hoping for a good night offensively and that’s what we had,” Johnson said. “Line’s doing their job, receivers catching balls, (running back) Elijah (Gibbs) is running hard. It’s a good offense.”

Fulton again responded and made it 14-12 with 2:39 left in the first when Jackson finished a six-play, 80-yard drive with a 19-yard scramble for a score.

It was easy to think at that point the back-and-forth scoring might continue to the end. It wouldn’t.

Farragut continued to score – six touchdowns on six first-half possessions – but Fulton didn’t. The half ended 42-12 and the game was long over. The second-half clock was continuous.

Up 14-12 with 2:39 left in the first, the rest of the Admirals’ first half scores came from: Gibbs’s five-yard run late in the first; Gibbs’s 57-yard tackle-eluding run with 9:52 left in the half; Johnson’s one-yard pass to Landis Davila less than two minutes later; and a two-yard Johnson-Davila hookup with 3.9 seconds left in the half.

The senior Gibbs carried seven times for 109 yards and a pair of scores in the first half. His performance put him over the 1000-yard mark for the season. He now has 1046 yards on 144 carries, and 14 touchdowns.

“Shout out to my linemen,” said Gibbs. “It feels real good. I’ve been trying to do this (get 1000 yards) my entire life. We’ve been focusing on our tempo, get our plays right, communicating with our offensive line and receivers and everything.”

Davila had five receptions for 34 yards and two scores.

Jackson, who ran for 181 yards and two scores on 15 carries, was nothing short of dazzling. His 81-yard touchdown run with 4:05 left in the third seemed to evade every single Admiral defender.

“That quarterback, he’s one of the quickest I’ve ever seen. He’s special,” Courtney said of the senior Jackson.

Barrett Smith took over for Johnson in the second half and threw two touchdowns on four of five completions. Jack Alley had eight tackles for the Admirals, six solo.

Attention now turns to regular season finales and the playoffs which start Nov. 4. The Farragut-Bearden winner will finish no worse than second in Region 2-6A, and will win it if Maryville loses to Bradley Central.

Fulton travels to Carter where a win will ensure second place in Region 2-4A. Seeding implications are big in both games.

“We gotta have a good game plan next week,” said Courtney. “These guys have to go out and execute.”