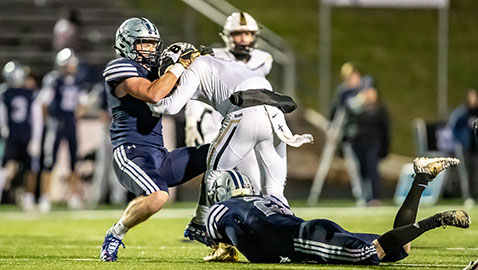 Longtime Farragut High School football coach Eddie Courtney saw his team do exactly what he wanted it to do in the first round of the TSSAA Class 6A Playoffs.

“I told them that I wanted them to have fun and play with effort,” Courtney said after the Admirals toppled Bradley Central 56-21 Friday night at Bill Clabo Field. “We had a great team effort and that’s why I’m so happy about it.

Courtney and the Admirals (6-5) know the Bears well. The two teams opened the season against each other in Cleveland and August. Farragut won that game, but the Admirals had to come from behind to earn that 37-30 victory.

But coming from behind wouldn’t be necessary on this night as the Admirals scored on their first possession of the contest when quarterback Gavin Wilkinson connected with Isaiah Arrington on a 62-yard scoring strike with 9 minutes, 39 seconds remaining in the first quarter. Simeon Sharp kicked the extra point to make it 7-0.

But the Bears, who finish their 2019 campaign with a 7-4 record, would show just how explosive they could be when they scored on their first play from scrimmage.

Tray Curry helped Bradley Central pull even when he broke loose and rumbled 63 yards for a touchdown. Kicker Isaac Vaughn evened the game with the ensuing extra point.

But the Admirals would go on to dominate the rest of the opening frame and score 21 unanswered points to take a 28-7 lead by quarter’s end as Eli Purcell, Wilkinson and Gabe Hensley all had touchdown runs in the period and Courtney had the three touchdown lead that he desperately felt his squad needed.

The Admirals would never relinquish the advantage. In fact, they would score two more touchdowns in the second stanza and build a 42-7 advantage by halftime and the rest of the game was played with a running clock, and the Admirals were having fun as their head coach instructed them to do.

“I wanted them to have fun and play loose,” Courtney said. I told the kids that. I didn’t want them to tighten up.

“We played loose and we were aggressive.”

In the second quarter, Alec Keathley had a 1-yard scoring plunge and Wilkinson threw a 75-yard touchdown pass to Arrington, who had been out with a shoulder injury, just before halftime to make it 42-7 and invoke the mercy rule.

From there, things would only get worse for the Bears, who fumbled the opening kickoff in the third quarter.

Farragut sophomore Dylan Cosey would recover the fumble and return it 27 yards for a TD to make the score 49-7 with just 14 seconds into the second half.

Bradley Central pulled to within 49-13 a short time later when quarterback Javin Burke connected with Kannon Hall on a 75-yard touchdown pass.

The Bears closed out the scoring when Burke, a junior, threw a late touchdown pass to Saylor Clark.

Farragut will take on Maryville (11-0) Friday in another rematch. The Rebels outlasted the Admirals 35-24 in the regular season.

The Bears, meanwhile, will hit the field again in 2020 when they’ll make a return trip to Farragut.