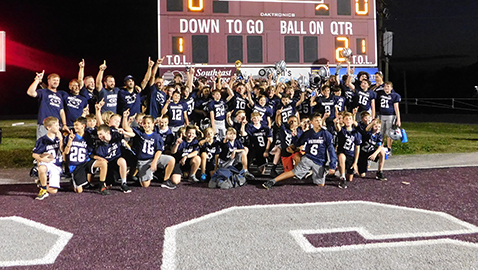 The Middle-school Aged Conference has been sanctioning football for two years and the league already has a repeat champion.

The Admirals, the conference’s No. 2 seed, achieved that feat when they outlasted Bearden 8-6 Thursday night before a spirited crowd at Bearden High School’s Bill Young Field.

Farragut (7-2) won the MAC’s inaugural championship in 2019 when it defeated Halls 24-0 to culminate a perfect campaign at Alcoa.

In 2020, the Admirals edged the top-seeded Bulldogs, who came into the championship showdown with a perfect 8-0 mark.

In the MAC, JV games are separated by two 20-minute halves with a running clock. Middle school teams wear their high school colors and play their games at high school stadiums.

On Thursday, the Admirals scored their touchdown in the first half when Gage Kirby connected with Colin Crider on a 21-yard scoring strike with 35 seconds remaining in the opening frame. The Admirals kicked the two-point conversion to extend their advantage to 8-0.

The Bulldogs, who went 2-5 last season, pulled to 8-6 when quarterback when Connor Hall threw a 15-yard touchdown pass to Jack Brillhart with seven minutes left in the contest. Bearden, however, missed the two-point conversion.

For the Admirals, it was a second consecutive league championship and their first under head coach Dustin Bolen, who has coached in Farragut’s youth program for several years.

“This is great for these kids,” said Bolen. “I’ve known and coached most of these kids for four or five years. I’ve watched them grow up and I coached our sixth-grade team last year.

“We had 12 new kids this year and I love the MAC league and I think it’s great for these kids to get the chance to play in the high school stadiums.”

For Bearden, it was a tough way to end a successful season.

“It was a tough night,” Bulldogs coach Daniel Henry said. “We had a great year but this was a tough way to end it.

“I was an assistant here with this team last year, and we had a lot of the same guys and we only won two games last year. We went from 2-5 last year to 8-1 this year and I’m excited to be part of this and see these kids as they move forward.”