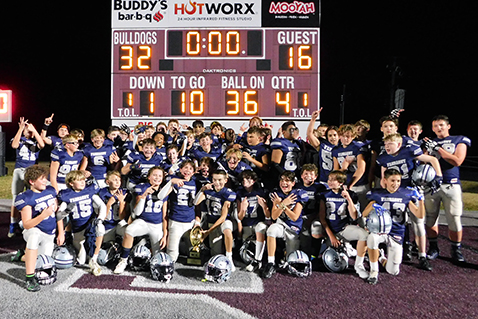 The Admirals fell behind for the first time in the 2022 playoffs as Hardin Valley scored on its first possession of the contest.

Farragut coach Ty Haley then had a message for his defense, which had given up less than 40 points in its first nine games.

The defense and the entire team responded after Hardin Valley quarterback Roman Hogrefe threw a 48-yard touchdown pass to Xavier Bowman with 3 minutes, 44 seconds remaining in the first quarter.

The Hawks’ touchdown and Haley’s pep talk served as wake-up calls for the Admirals (10-0), who took control of the game.

Farragut pulled even, tying the contest 8-8, on its first possession when Matthew Rogers scored on a 32-yard run late in the opening frame.

The Admirals’ defense then joined in and with the Hawks mired deep in their own territory, turned the ball over as Jack Wright intercepted Hogrefe and returned the ball to the Hardin Valley 6-yard line.

Rogers then cashed in with his second touchdown, a 15-yard run with five minutes remaining in the second quarter. Wright’s two-point conversion made the score 16-8.

Farragut’s final touchdown of the first half came on a trick play as Kyle Clark threw a pass to Brooks Johnston, who pitched the ball to Nathan Jacobs, who scampered into the end zone with 21 seconds left in the first half.

Rogers added another touchdown, a 3-yarder early in the third quarter.

The majority of the second half was played with a running clock before the Hawks (7-2-1) pulled to within 32-16 late in the contest.