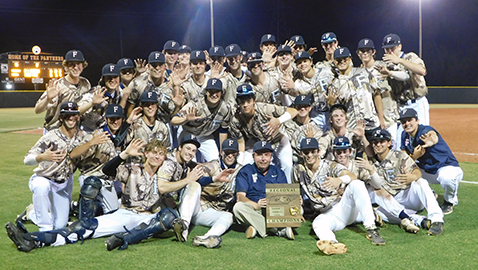 Powell High’s baseball team looked to be in good shape last week when relief ace Logen Sutton struck out the side in the top of the sixth inning and the Panthers were leading Farragut by one run in the Region 2-AAA championship game.

The strikeout victims also were the 1-2-3 batters in the Admirals’ lineup, including UT signee Angus Pence for the third out.

Sutton and the guys in Orange and Black came off Danny T. Maples Field feeling good as “Another One Bites the Dust” played loudly over the sound system Wednesday night.

But the Farragut mystique would soon strike again.

The Admirals, winners of 10 TSSAA state titles and a state finalist 16 times, rallied for an 8-6 victory to add another chapter to the school’s storied baseball history.

Powell managed a two-out base on balls by Logan Poteet in the bottom of the sixth, but junior standout Jaxson Pease was put into pitch for the Admirals and he got Sutton, the best slugger in the Powell batting order, to line out to shortstop.

And when Sutton returned to the mound for the save in the seventh inning, suddenly he was no longer unhittable.

Tanner Kim led off with a single to right-center. Sutton did get Hudson Seigler to ground into a 4-6 fielder’s choice. But pinch-hitter Hunter Merrick drilled a shot down the right field line to put runners on second and third.

The mystique was now in full force.

A single up the middle by Brennon Seigler tied the score at 6-6. A single to right field by freshman Lucas Buckner, the son of Farragut Head Coach Matt Buckner, put the Admirals ahead 7-6.

After Sutton fanned pinch-hitter Landis Davila for out No. 2, an error by the backup third baseman on a grounder in the infield allowed Seigler to score from third to give Farragut its two-run advantage.

The stunned Panthers went down quietly in the bottom of the seventh against Pease, the District 4-AAA Pitcher of the Year, as he struck out two and got a groundout to second.

The game was over, but not the season. Both teams would play in the do or die Sectionals Friday, with Farragut hosting Seymour and Powell traveling to Science Hill.

Seymour, guilty of four errors, had lost at Science Hill 5-1 in the Region 1-AAA finals.

The Sectional winners advance to the state tournament in this week’s Spring Fling.

Powell took a 3-0 lead over Farragut in the first inning, scoring two runs on wild pitches by Admirals starter Carson Mitchell and another on an error by Pence at shortstop.

Farragut scored a run in the second and third innings and took a 5-3 lead with three runs in the fourth. Two bases loaded walks by Powell starter Ben Scott accounted for the last two runs and Scott was taken out after having thrown over 90 pitches.

The Panthers cut the gap to 5-4 in the fourth and retook the lead with back-to-back home runs in the fifth by Poteet and Sutton.