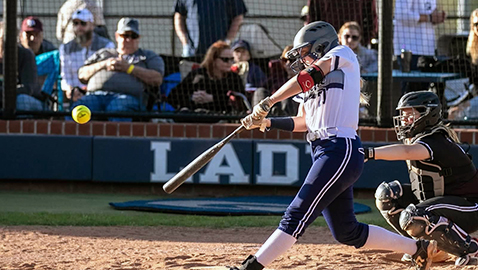 Grace Christian Academy senior Hannah Cooper gives the softball a ride during a game this year. Photo by Mark Cooper.

Who are the top teams on the local high school softball scene this season?

Right now that answer would have to be Farragut.

Including games through April 22, the Lady Admirals were 21-1 overall. Their lone loss was a 9-8 decision to Wilson Central of Lebanon on March 26 in a tournament at a neutral site.

“So far we are on track to meet our regular season goals in district play (currently 12-0 in Disrict 4-AAA) and working towards post-season play,” said Coach Nick Green.

“We have everything as a team: chemistry, depth, hitting (high average, power, slapping), pitching, speed and defense.

Senior Cameron Young was leading Farragut with a .568 batting average when The Focus took a look at the statistics last week. Ace Strickland, a junior, was close behind in that department at .541 and led the team with 16 stolen bases.

Lauren Brakovec had a team-high five home runs and Avery Flatford was leading the Lady Admirals in the circle with a 10-0 record and 2.80 earned run average.

Farragut’s worksheet includes a 17-7 win over Powell, an 8-6 win over Hardin Valley Academy, a 9-5 win over Grace Christian Academy and a 5-0 win over Karns – other local teams which have good chances of making it to this year’s Spring Fling and state tourney in Murfreesboro:

Traditional power Gibbs (19-7) is a regular in Rutherford County in May.

Coach Carol Mitchell, who has over 900 career wins, will take her team to Farragut today (April 26) for a 5:30 non-district showdown. The Class AA Eagles also will host Class AAA Powell Wednesday in another top attraction.

“After playing only three games in March, this team has put together a nice run of games thus far in April,” said Mitchell. “We will finish the regular season with a tournament in Cookeville and six non-district games (Farragut, Powell, Alcoa, Jefferson County, Halls and Maryville).

Senior catcher and third baseman Bre Bumgardner has a .550 BA and five HRs. Shelby Blake, a senior pitcher and shortstop, is hitting .514 with four triples.

“As post-season play begins on May 10, the team looks to rise up to the challenge of the district, region, and substate foes to advance to the state tournament once again.”

Powell also has a strong 1-2 duo in the circle with seniors Delayna Bryant and Alaina Watson.

“We hope to earn one of the top seeds for the district tourney,” said Coach Whitney Cruze, whose team has a rematch with Farragut this week. “Our district is extremely tough with four or five teams with the potential to advance out of the tournament; however, I think our team has a good chance at making a post-season run!

“This team has been a joy to coach. These girls have a lot of heart and have worked hard all season trying to be the strongest possible by tournament time.”

Top players for HVA include senior pitcher Denver Hogrefe, who has a 9-4 record and 2.20 ERA.

Savanna Beard, senior third baseman, has a .463 batting average and has scored 31 runs.

Grace Christian Academy, a Division II Class A school, has compiled a 21-5-1 record this season against some of the best teams in Knoxville to prepare for a championship run. The Lady Rams also finished the district with a perfect 12-0 record.

“These young ladies have worked hard to put themselves in a place where they control their own destiny moving forward,” said Coach Dewayne Hunt. “We have advanced to the Top 4 teams in our region, which will allow us to play a state game regardless of the region outcome.

“Our goal is still to secure that Number 1 region spot so we can host all the way to the state championship in Murfreesboro. We are very proud of our five seniors that have led on and off the field. Their leadership with the younger group is what has kept us successful.”

GCA has a team batting average of .414. Hailey Brooks leads the way with a .580 average, followed by Ella Brooks at .534 and Caitlin Dixon at .442. Other offensive leaders include Heather LaForce, Jade Barfield and Hunter Troutt.

Hannah Cooper is 20-5-1 in the circle and has shown senior leadership.

“We look forward to continue to find ways to compete with the area’s top teams,” said Coach Hunt. “It will be great to see just how far this team can go after being off a year. The coaches are proud of each young lady in the way they prepare and play each game, not taking a single moment for granted.”

Abby McPherson, Taylor Spencer and Alyssa Maples have all done a nice job in the circle for Karns this season, pitching to their defense and keeping the Lady Beavers in ball games, said Coach Craig Webb. Karns also picked up at least one win against every district opponent it faced in the regular season, noted Webb.

“We have a team full of talented players that have contributed to our success,” he added.

Consistent play every night will be needed if Karns makes noise in post-season play.

“The talent and ability is there,” said Coach Webb. “These kids have worked hard and battled. If we can stay healthy and have them all available, I believe it’s going to be an exciting turning point for our program and this team once tournament time begins.”