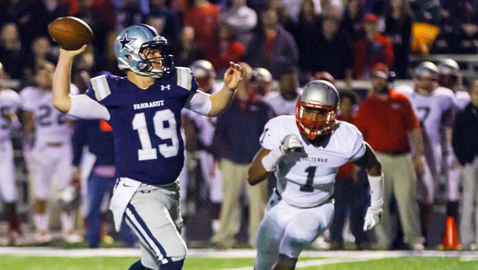 When Tennessee high school football coaches begin preseason workouts on those hot days in mid-July, most tell their respective teams that they would like to still be practicing on Thanksgiving Day.

That’s an opportunity that Farragut High School will get in 2016.

“We’re going to practice on Thanksgiving Day,” Admirals coach Eddie Courtney said after his squad nabbed an improbable 56-49 double-overtime victory over Ooltewah in the Class 5A Quarterfinals Friday night at Bill Clabo Field.

Farragut, which will play for a right to reach the Blue Cross Bowl this week, won a quarterfinal game for the first time in more than two decades. The Admirals (12-1), who have won 10 consecutive games since losing to Oak Ridge just before Labor Day Weekend, last made the state semifinals in 1995.

And early Friday night, it looked as though that trend would continue as the Owls quickly raced to a 21-0 lead when Cameron Turner scored on a 1-yard plunge with 10 minutes, 28 seconds remaining in the second quarter.

The Admirals would finally get on the board a short time later when senior quarterback Adam Fulton connected with Braden Collins to make it 21-7.

Things went back and forth in the second stanza but Turner scored again with 24 seconds to play in the first half and the Owls (10-3) had a 35-14 lead and seemed to have the game firmly in hand.

Things got bleaker for Farragut in the third quarter when Ooltewah extended its advantage to 42-14 less than three minutes into the frame.

But then things got crazy as the Admirals rallied to tie the game.

Amon Johnson’s 5-yard touchdown plunge made it 42-35 with 9:12 remaining in regulation.

The Admirals would pull even when Fulton connected with Jacob Warren on a 9-yard scoring strike with 1:05 left in the fourth quarter.

The Owls then drove to the 11-yard line where Aleksander Toser missed a potential game-winning 28-yard field goal as time expired.

In the first overtime, Ooltewah struck first when Turner scored from two yards out to make it 49-42.

Cooper Hardin answered and evened things with his own 2-yard touchdown plunge on Farragut’s possession in the first OT.

Hardin then gave Farragut the lead as the Admirals had the ball first in the second extra frame.

Farragut would win the game when its defense stopped Turner at the 1-yard line on fourth down to end things and then the celebration was on.

Courtney was obviously elated after the game while Hardin rested on the field after his team notched its improbable win thanks to his overtime heroics.

“He’s done this for us in the last three games,” Courtney said of Hardin, who rushed for 168 yards and two scores on 24 carries. “I’m just so proud of these kids.

“I told them at halftime that we had two choices. We could either fight and try to win this game or we could just roll over.”

The longtime coach also noted that the latter choice wasn’t really an option seeing what his team had accomplished this season.

“I knew that we weren’t that team,” Courtney said.

Fulton threw a pair of early interceptions but bounced back he was 22-for-36 and threw four touchdown passes. He also amassed 288 passing yards. Collins caught three of his scoring strikes.

Collins had scoring receptions 35, 20 and 12 yards. He finished the game with 12 receptions for 167 yards. He also rushed for 70 yards when he carried on reverse plays.

Farragut will host South-Doyle Friday as Knoxville will be guaranteed one team in the State Title tilt.

The Admirals defeated the Cherokees (8-5) in the regular season. South-Doyle beat Morristown West 41-34. The Cherokees also defeated Gibbs in the postseason and avenged another previous loss.