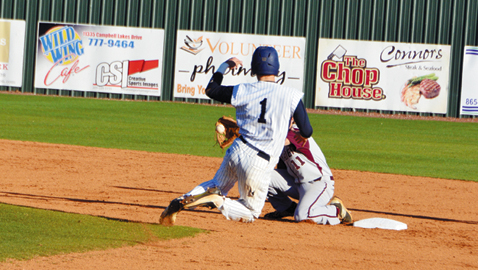 “We got some two-out hits tonight and we didn’t get those hits the first time we played them,” Admirals coach Matt Buckner said after his squad notched a 4-1 district victory over rival Bearden at John Heatherly Field at the Ballpark in Farragut.

The Admirals also got a solid pitching performance from Dylan Pacifico, who surrendered just one run, three hits and three walks. Farragut’s right hander hit a batter and struck out nine in 5 1/3 innings.

“He’s a senior and he’s our guy and he did what he was supposed to do,” Buckner said of Pacifico, who helped the Admirals avenge their earlier loss to the Bulldogs last month.

Farragut got on the board early Tuesday night when senior John Painter belted a hanging changeup from Bearden starter David Beam over the fence for a solo home run.

“He hung a changeup and I just swung,” said Painter, who closed the game on the mound for the Admirals. “I wasn’t sure that it was going to get over and I almost tripped over first base when [first base] coach [Garrett Copeland] was giving me a high five.”

The Admirals, who claimed sole possession of first place in District 4-AAA with the win, extended their advantage to 2-0 when a clutch two-out single by sophomore Cade Burkey plated Chandler Chambers, who doubled earlier in the frame.

Farragut took a 3-0 lead in the fourth when an RBI single by first baseman Parker Noland drove in Carmelo Venero, who doubled with one out in the frame.

The Admirals scored their third run after Pacifico struck out the side with two runners in scoring position in the top of the inning.

The Bulldogs scored their lone run of the contest in the top of the sixth. There, Bearden took advantage of a one-out walk. Prater Knight drew the free pass and took second when Pacifico uncorked a wild pitch. He came home when Beam singled.

Farragut added its final run of the game when Cole Morgan walked with the bases loaded to score Justen Freeman. Freeman was the first batter that Bearden reliever Paul Underwood faced and he walked on four pitches.

Beam labored on the mound but said that he made some good pitches against the Admirals.

“I was hitting my spots but they just got some good hits off of me,” Beam said.

“Farragut got a good effort and both their pitchers, Painter and Pacifico threw well tonight,” Rice said. “We’re not real happy with our effort.

“We struck out 13 times and got caught looking four or five times but it’s just one night. I thought David threw really well.”

Bearden (17-6 overall, 7-2 in the district) found its way back into the win column when it routed Lenoir City 17-4 Wednesday in Loudon County.

Beam had two doubles against the Panthers. He drove in four runs and scored another. Brandon Trammell went 3-for-4 with a triple. He scored two runs and drove in four.

Bryson Ford had four hits and scored three runs for the Bulldogs.