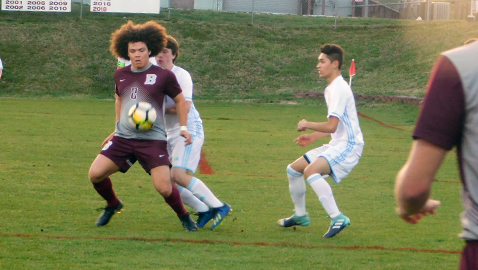 Bearden High School boys soccer coach Ryan Radcliffe makes it no secret that his team must get off to a fast start. The Bulldogs got the message Tuesday night.

“We got off to a fast start and I’ve preached about that all season,” Radcliffe said after Bearden notched an 8-0 non-district victory over Hardin Valley Academy at Turner-Allender Field.

The Bulldogs (2-1) were off for Spring Break last week. They last played at an elite tournament where they split a pair of games over the weekend of March 8.

In the Peachtree State, Bearden came up on the short end of a 5-3 decision against Westminster, which is ranked second in the nation. The Bulldogs rebounded to beat Bastavia.

“We were coming off a tough tournament in Atlanta and we didn’t get off to a fast start and it bit us in the butt,” Radcliffe said.

That certainly wasn’t a problem Tuesday night against the Hawks (1-1-1).

Bearden scored four goals in less than 21 minutes and the Bulldogs’ defense was stingy, allowing just two shots over the first 40 minutes. The Hawks mustered only six shots on goal as Bearden goalkeepers Holden Giesecke and Jonathan Diaz combined for a shutout victory.

The Bulldogs wasted little time getting on the scoreboard against Hardin Valley. They took a 1-0 lead when Carter Turner scored off an assist from Collin Lewis.

They extended their lead to 3-0 on a marker by Lewis in the 17th minute before Caleb Wilkins joined the scoring parade approximately four minutes later.

Everett Hauser scored in the 39th minute to give the Bulldogs the 5-0 advantage they enjoyed at halftime.

Bearden tallied again, 10 minutes into the second half, when Hauser took a corner kick that ricocheted into the net off a Hardin Valley defender to make the score 6-0.

The Bulldogs made it 7-0 when Asiimwe Ironside converted a penalty kick just minutes later.

Jonathan Meystrik closed out the scoring when he tallied in the 60th minute.

Hardin Valley first-year coach Brad Delano could only tip his hat to Bearden after the match.

“They’re a good team,” Delano said of the Bulldogs. “They were just better than us today.

“They’re just a really good team. I don’t know what else to say.”