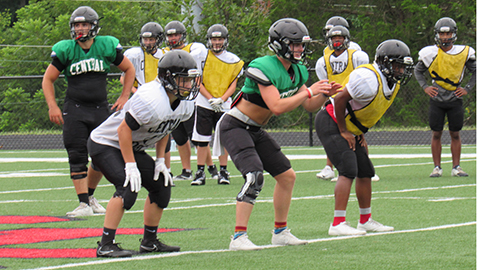 Central High overcame a number of injuries at the quarterback position last season to advance to the Class 5A state semifinals.

The Bobcats lost their starter in just the second game and their No. 2 field general soon after that. A freshman stepped in and played much of the regular season before being sidelined.

In all, five different players had a hand in the QB job before the season ended with a loss to Knoxville Catholic, which went on to capture the state title.

“It was just an unbelievable job by the kids and the coaches,” recalled Bryson Rosser last week before continuing preparation for his fifth season as head coach in Fountain City. “It will be one of the most memorable seasons I’ve had for sure.”

Rosser is pleased to have his top two quarterbacks back healthy for the 2018 campaign, which is less than two weeks away.

“We have Dakota Fawver that looks and hopes to be back,” said Rosser. “Eli Sharp has been battling him for some time.”

The talented Fawver, who started as a freshman at Carter before transferring to Central, suffered a knee injury at Fulton.

“He’s close to 100 percent,” said Rosser prior to his team’s practice July 31. “He’s still finishing up rehab. This preseason will be big for us to see what kind of progress he’s making, but he’s close.”

Sharp is 100 percent after suffering a lower leg injury not long after taking over for Fawver and then spraining an ankle in the playoffs.

Rosser said last week the quarterback position was “a two-way battle” between Fawver and Sharp. Luke Ferguson (6-2, 180) got some experience in his freshman season last year and is battling for some reps.

“Ferguson is still relatively young,” said Rosser. “He got thrown into the fire last year unfortunately, but he still has some strides that he needs to make.”

In all, Central returns six starters on offense and seven on defense.

“Our strength I think is maturity,” said Rosser. “We have a lot of returning faces from last year. A lot of guys went through the adversity of last year, so I’m looking forward to seeing them play again.”

Strong safety Xavier Washington (5-10, 200), an All-Knox County first-team selection in 2017, heads up the defense. Johnson is slated to start at free safety with Jaidin Horton battling for the job. The corners will be Holliday and Evan Walker.

Deonte Middleton (6-3, 242), Clemons and Troutman are battling for starting jobs up front and Phillip Young (6-3, 215) also is a returning starter. Michael Shafer is in the mix as well.

Freshman Ryan Bolton is competing to contribute as a punter on special teams and also will play some quarterback.

Jarred Swislosky kicks field goals and extra points and is battling with Sharp, who also is a kickoff and PAT guy.

Rosser serves as his own offensive coordinator, while Nick Craney is in charge of the Bobcats’ defense.

Central will have six home games this season, including the opener against Tennessee High on Thursday, Aug. 16.