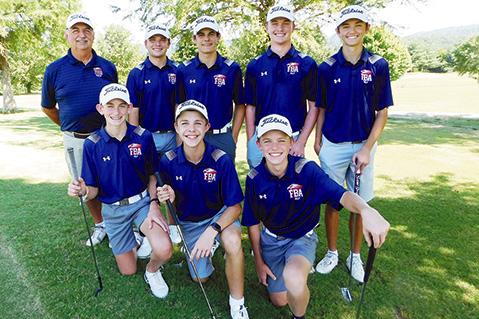 First Baptist Academy is in the midst of its best boys golf season ever.

A little over a month into the season, the Eagles have had some head-turning performances despite being a young team with only two upperclassmen among its top six players.

The highlights thus far include a fourth place finish in the season-opening 5Star Prep Masters tournament and a victory over Christian Academy of Knoxville, a perennial state power, in a regular season match.

Johnny Cox and his wife Karen are “co-coaches” of the team.

“We knew if we were going to build a high school program, we had to start in the middle school,” said Johnny. “The middle school team last year finished runner-up in the region. We got beat by one stroke.”

That team included four players who are now on the high school team – Lane Stokes, who is a freshman, and a trio of current eighth graders in Brady Morris, Alex Green and Luke McGhee. This foursome replaced the four seniors who graduated.

Cooper Roberts, a junior, returned as First Baptist’s No. 1 player. He qualified for the state tourney last year as an individual and became FBA’s first-ever All-State golfer as he placed sixth in the TSSAA’s first state meet at Sevierville.

“As an incoming freshman, Stokes has got a lot of potential,” said Cox. “All of my golfers could play at the next level if they keep it up because they are young.”

Others representing FBA were junior Seth Ailey (80-84) and eighth grader Alex Green (91-80). McGhee and Cooper Mercer round out the team.

The Prep Masters had a 16-team field of top area squads at the Three Ridges course. It was FBA’s first-ever Top 10 showing in the tournament.

FBA’s top five scorers in each round gave the Eagles 18-hole totals of 309 and 307. Coach Cox felt their individual scores were very good for such a young team. “We played really well.”

After the Prep Masters, Cox took his team to Morristown Country Club to play against some state powers from upper East Tennessee plus some strong Knoxville teams in an 18-hole, one-day tourney.

“Three Ridges is pretty hard, but up there we had a lot of wind and the weather was different,” pointed out Cox. “We came in third out of the 18 teams, which is really good. We shot a 327 and Bearden beat us by one stroke. We tied Halls, after having beaten them in the Prep Masters.”

The Division II Class A school, which is located in Powell, has played over half of its 14 regular season matches and remains unbeaten.

The Eagles outshot CAK 156 to 160 at the Sevierville Golf Club, which is the new home of the state tournament. Grace Christian and TKA also were in the four-team field.

“I think we’ve really improved a lot,” said Cox, as far as defeating CAK, a nine-time state champion. “It puts our program where we need to be and shows we can compete with CAK at this point, even though they have won five state championships in a row and are probably still a little bit ahead of us right now. But if we can finish first or second in the region, then we’ll be advancing to the state.”

As a team, FBA placed fourth in last season’s region at Three Ridges. This year the region rotates back to the Bear Trace at Harrison Bay course in Chattanooga. Cox said he will be taking the Eagles for a regular season match at Harrison Bay Sept. 17, which will help them get familiar with the course.

Last week, First Baptist put together its lowest 9-hole score of the season (152) to beat Lakeway Christian (173) and Claiborne County (192) at the Dandridge Golf Course.

Johnny said the team’s camaraderie is great. “It’s the best kids I’ve ever coached. Everybody gets along. The chemistry – it’s like a family and that’s the way we want it.

“We go out and eat. We do things together. They stay really close to each other.”

The Eagles were back in action Thursday at Three Ridges and shot 155 in defeating Anderson County and Grace Christian.

Looking ahead, Cox said: “We told the boys who are juniors that we would stay through their senior year, and if we get to state, we may stay a little longer.”