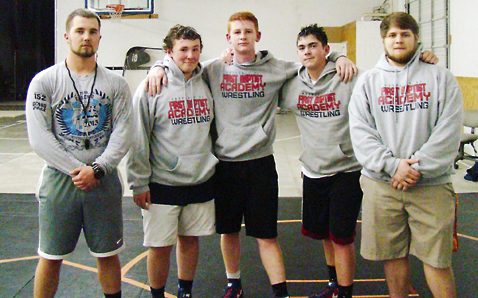 Knox County has a new wrestling program. First Baptist Academy-Powell began competing in the sport this season and the Eagles are a Freshman/JV Team but Coach Josh Neely has some lofty expectations for the program’s future.

The program may be new but the coach is no stranger to high school athletics and he’s also a familiar face in the Powell Community. Josh Neely once played football and wrestled for the Powell Panthers before graduating from the school in 2015,

The wrestling team’s season will conclude at the end of the month when they compete in the Freshman/JV Tournament at Northview Academy.

Neely said the first year of the program has been a successful one.

“I think, first and foremost, it’s got to be fun and these guys really enjoy wrestling,” said Neely, who played football and wrestled at Powell High School for four years. “They really seem to love it.

“They come in here and they work hard every day and that just shows how much they enjoy the sport and how much they want to get better at it.”

The Eagles practice in a gym that’s in a converted warehouse behind Vaughn Pharmacy.

Numbers are small at First Baptist Academy this season as the team is comprised of Eric Armstrong (a freshman who wrestles in the 160-pound weight division); Derek Harrison (a sophomore 182-pounder) and sophomore Nick Hutchison, who also competes in the 160-pound class. Two of the grapplers are newcomers to the sport and Hutchison is the nephew of Jimmy Parton, the one-time Panthers head coach, who currently serves as an assistant to Larry Neely at Powell High.

Josh said that First Baptist Academy has its youth wrestling program in place and that’s he’s hopeful that those athletes will pursue the sport in high school. He says that he must sell the sport by appealing to the athlete’s desire to participate and compete.

Wrestling is intense and extremely demanding. But unlike other high school sports, wrestlers are not relegated to sitting on the bench.

“In wrestling, you can always find a match for somebody,” Josh said. “Even if it’s an exhibition match, it’s a match.

“Wrestling is for everybody.”

Although he coaches wrestling alongside high school chum and former teammate Eli Bishop, Josh said that football has been a bigger part of his life than wrestling. But like most wrestlers, he has a passion for that sport as well.

He hopes to pursue a coaching position in either sport and may look to coach college wrestling or high school, college and professional football.

For now, he’s at First Baptist, where he attends church. He’s grateful that headmaster Matt Mercer (who is also the school’s boys basketball coach) has given him the opportunity.

Josh will use a long-term gauge to measure the program’s success.

“My biggest thing is keeping these guys in the sport,” he said.

The young coach has had plenty of help from his father and one-time Halls wrestling legend and longtime coach Chris Vandergriff. Vandergriff and the elder Neely were teammates with the Red Devils. Vandergriff has always been Knoxville’s biggest wrestling ambassador. He’s been retired from coaching for several years. But he’s always lending a hand.

“They’ve both helped me,” Josh said. “Coach V has really helped me. He and my dad were teammates.

“Dad has given me pointers on how to make a schedule. We’ve practiced at Powell and he’s given us a mat.”