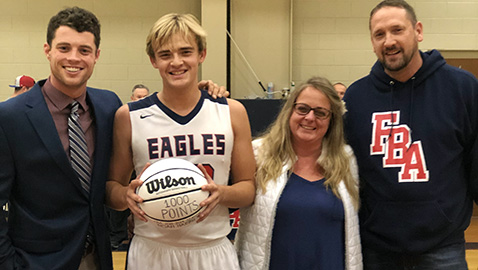 First Baptist Academy basketball fans recognized a special achievement of a FBA player prior to the Eagles’ home game in Powell Tuesday, Dec. 4.

Noah Harris, FBA junior, was honored for having reached the 1,000-point plateau in his prep career in a win over Concord Christian School on Friday, Nov. 30.

Reflecting on the milestone, Harris credited “all the people who have put a lot in my life and meant a lot, like the coaches I’ve had.”

Harris also said it meant a lot to him to do it playing for First Baptist Academy.

“It’s a special program I’m trying to help build to get to that next spot in our division,” he said. But it meant a lot to me and everybody’s pushing me … I credit the people around me who got me to this point.”

“His energy is contagious and he’s going to compete for the entirety of the game, no questions asked,” said Tucker. “He’s put a lot of work in and it’s paid off for him.”

Harris scored 221 points playing as an eighth grader on the high school level. He added 372 points as a freshman and 342 in his sophomore year. He had 83 points through this season’s first six games.