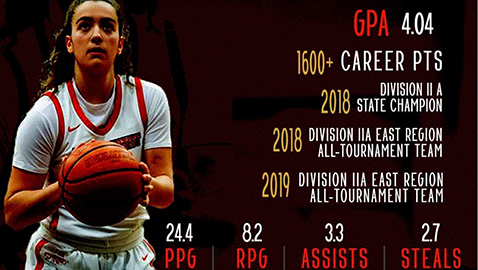 When is the last time you heard of a quadruple double in basketball?

One happened last week when Catherine Hendershott of First Baptist Academy scored 28 points and had 11 rebounds, 10 assists and 10 steals in a 72-33 win at Concord Christian School.

Hendershott, who formerly played at Webb, transferred to FBA from the Knoxville Ambassadors’ home school team in December. She is a senior point guard / wing.

“Catherine will probably play on the NCAA Division II or III level,” said Atheltic Director Johnny Cox, who also is a longtime high school and college basketball referee. “She will be a good point guard for somebody.”

The quadruple double was just the latest bright spot in what has been a special season for the FBA girls under new coach Freeman Pinkney.

The Lady Eagles, who were scheduled to host Berean Christian in their regular season finale Friday, have boosted their school-record win total to 18 games.

The First Baptist Academy girls (18-12 and 6-5 in region) will go into the TSSAA Division II Class A East Region tournament this week after being in the middle of the regular season standings with The King’s Academy and Webb. Lakeway Christian Academy and Christian Academy of Knoxville were on top.

For the first time ever, FBA defeated Webb, CAK and Grace Christian, according to Pinkney. Last season, he guided the Knoxville Catholic girls to their first ever appearance in the state tournament.

“We’re kind of putting FBA on the map,” said Pinkney. “I’m trying and these girls have bought in. We get great support from the administration.”

BASKETBALL: With Division I district tournaments beginning in the next few weeks, arrangements are being finalized for the 2021 TSSAA BlueCross State Championships. The tournaments will have a new look this season as a result of the continuing COVID-19 pandemic.

Due to restrictions and public health concerns in Davidson County, the Division II tournament will be held at Tennessee Tech in Cookeville March 4-6.

The Division I BlueCross Championships, which were cut short a year ago, will return to MTSU’s Murphy Center, which has been the host of many state tournaments since 1975.

Games will be played Wednesday through Friday each week of the Division I girls’ and boys’ tournaments, with the finals on Saturday.

No tickets are expected to be available to the general public.

The Tigers (24-5) were slated to go against Signal Mountain in the Class A-AA semifinals Saturday at Nolensville.

The Tigers are ranked No. 9 in the latest Tennessee High School Wrestling Poll. Baylor and Cleveland are ranked No. 1 and No. 2, respectively, in the poll.

CHEER AND DANCE: Preparations are currently underway for the 2020-21 TSSAA Cheer / Dance Championships which will be conducted in an online “virtual” format this school year due to COVID-19.

BOWDEN WATCH: The Long Island Nets, the NBA G League affiliate of the Brooklyn Nets, announced their 2021 roster Jan. 27 and former Carter High and UT basketball standout Jordan Bowden is on the team.

MONICA WATCH: Former UT great Monica Abbott is a pitcher on the 15-player U.S. Olympic softball team which is preparing for the delayed Tokyo Olympics in July.

Softball will be an Olympic sport this year for the first time since 2008.