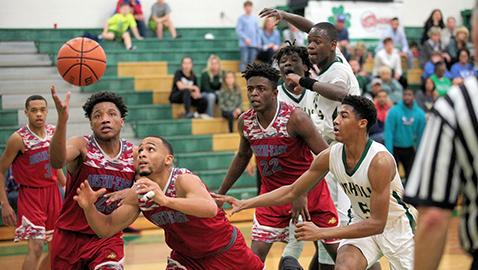 One win streak was snapped while another continued in a Knox County high school boys’ basketball showdown Friday night.

Homestanding Knoxville Catholic had won 11 games in a row, but Austin-East put an end to that with a 60-56 victory in the Safe T Security Christmas Classic.

It was a tall order, but A-E got it done.

Good guard play and quickness carried the Roadrunners to their sixth win in a row in an exciting game that matched two of Knoxville’s top teams and squads with different strengths.

The tall and talented Irishmen are now 13-2, with their only other loss coming at Maryville 58-53 on Nov. 20. A-E improved to 11-2 and will look to avenge one of its losses when it hosts rival Fulton Saturday.

“This is our biggest win this season by far,” said Austin-East Coach Marcus Stanton. “Catholic was a team we didn’t match up with at all. You could tell that by the size, but our guards played hard and probably their best game of the year. They played hard and they played fast and they hit some big shots down the stretch.”

Catholic Coach Mike Hutchens praised the Roadrunners and said the loss will be a good one for his team to learn from.

“That was an in-your-face defensive performance by A-E and I give them a lot of credit,” said Hutchens. “They can get after you and they did.

“It was the first close game we’ve had in awhile and it was good for us. We’ve still got to learn how to execute at the end of the game. That’s something we’ll be able to work on in practice.”

An old fashion three-point play by Oduspie gave Catholic its first lead with 2:50 showing in the first period when he scored on a lob inside and added the free throw to make it 10-9. The big guy scored on another lob and then on an in-bounds play to increase the Irish lead to 14-9. It was 14-11 after the first stop.

MacDonald hit a 3-point shot to start the second period, giving Catholic a six-point advantage (17-11), but Austin-East scored nine straight points, capped by Pierson’s 3-pointer from the right wing at 4:46.

Tamba, however, finished the first half strong and converted three free throws to send the Irish into the dressing room with a 24-22 edge.

Oduspie fed Tamba for a basket inside midway through the third period to give Catholic a 33-28 lead.

The Roadrunners put together flurry, outscoring the Irish 12-2 and led 40-35 after a short jumper by Dixson. A jumper by Pierson and a rebound basket inside by Upton gave A-E a 44-37 lead at the end of the third period.

Catholic battled back and took a 52-51 lead on a layup by MacDonald with 3:56 remaining. But that would be the Irishmen’s last lead.

Foster scored on a drive to the basket and a hustle play by Shiyaun Jackson put A-E ahead 58-54 with 1:02 to go.

After Edwards made both ends of a 1-and-1 to pull Catholic within two (58-56), Irish senior Connor Kuerschen committed a personal foul and technical foul with 38.9 seconds left. Pierson cashed in both of the technical foul shots to extend the A-E lead to four.

The Roadrunners missed the front end of three bonus situations in the remaining time, but Catholic missed shots and couldn’t take advantage of it.