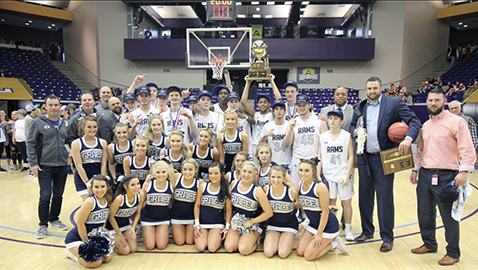 Opposites attract, even in basketball.

Grace Christian Academy and Webb School matched up five times this season because their different styles of play made them the two best TSSAA Division II-A teams in the state.

First-year GCA head coach Brandon Clifford respected how Webb could “grind” on opponents, including his Rams.

The Spartans held their opposition to under 40 points in 13 games this season.

Grace Christian, on the other hand, liked to get it and go. Ten times, the Rams scored over 80 points.

Webb was smallish but tough and could turn you over. GCA liked to score plus had a difference maker inside in a 6-8 senior forward.

Their five-game series came down to a little more than two minutes for the state championship.

Someone said if Grace and Webb played 100 times, the Rams would win 51 and the Spartans 49.

“Well, I couldn’t say they were wrong,” responded Coach Clifford last Wednesday, just days after his team defeated Webb 46-44 in the Blue Cross tournament title game on March 3 at Lipscomb University in Nashville.

Each had won twice in the first four meetings.

“Webb is a very good basketball team,” said Clifford. “(Coach) Ricky (Norris) does a great job with those guys. We’re kind of opposites in how we play the game.

“Basketball is one of those things where there is a million ways to be successful at it and they have their way and we have ours. It was fun going against them. I tell you they are hard to play against because of how they grind on you.

“Saturday they were just as deserving of a championship as we were. We just happened to be a little bit better, so we were fortunate to get that third win in the series. If we played that game 10 times, who knows which way it would go.

“It really just comes down to players making plays. The coaches, we had to get out of the way there at the end. My boys stepped up and they got the one that mattered. I’m proud of them.”

In the two teams’ most previous meeting Feb. 17, Webb won 44-19 in the East Region title game at Notre Dame High in Chattanooga.

“They played a little keep away against us that last time,” recalled Clifford. “It was a rough night for us, but at the same time it kind of allowed us to see how they would potentially play us in the state championship game if we were to run into each other again.”

Webb led most of the way in the state finals and had a 20-9 advantage in the second period.

Grace Christian went on an 8-0 run after intermission and pulled into a 22-22 tie when a power failure in the arena caused the lights to go out. After a 20-minute delay, Webb regained a five-point lead.

“We had to force them to take shots, so we could block it or rebound,” said Clifford.

“We finally tied it up (with 3:17 to go) and were able to pull them out of their zone. CJ (Gettelfinger) got a layup to put us up and I don’t think we ever trailed after that.”

After a free throw by tourney MVP Grant Ledford extended the lead to three, senior reserve Ryan Medders made a key play by pouncing on a loose ball to give the Rams’ valuable possession with 52 seconds left.

Two more foul shots by Ledford pushed the lead to 43-38.

Charlie Wyrick hit a 3-point shot for Webb to keep the Spartans alive, but a turnover with eight seconds to go spoiled their last chance to pull even.

“That’s a testament to our guys’ toughness – being able to get stops and make plays down the stretch,” said Clifford.

Ledford also had a huge steal late on a baseline rotation when it was a one-possession game. The 6-5 junior guard finished with a game-high 18 points and six rebounds.

Webb (29-6) got 14 points from Chase Ridenour and 11 points and three assists from Myles Rasnick. Tariq Daughton chipped in seven points and had eight rebounds.

ALL TOURNEY: In addition to MVP Grant Ledford, GCA’s CJ Gettelfinger and Baylor Younker were named to the all-tournament team. Webb was represented by Myles Rasnick and Tariq Daughton. Other honorees included Schyler Forrest of Lausanne and Keon Johnson of The Webb School in Bell Buckle.