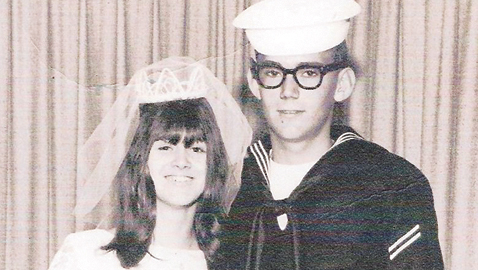 Mike and Lettie Steely celebrated their 50th Wedding Anniversary April 1st in Washington, D.C., where they lived during the first years of their marriage. The Steelys have two adult sons, Michael Howard and Burton Ross, two grandchildren, Bethe and Gage, and two step-grandchildren, Julia and Sean.

Mike, a writer for The Knoxville Focus, was a U. S. Coast Guard Journalist and later a daily newspaper reporter. The couple met in high school after their parents moved to Florida; Mike is originally from Jellico, Tennessee, and Lettie is from Devil’s Lake, Michigan. They were married April 1, 1966, at the Drive-In Church in Pinellas Park, Florida.

While living in the Washington D.C. area Mike worked at Coast Guard Headquarters and was a reporter for the Northern Virginia Newspapers and the Manassas Journal. Both Mike and Lettie attended East Tennessee State University. He was a reporter on the Kingsport Times-News and the Morristown Tribune.

Lettie was the business manager of the Jellico Advance-Sentinel and the Monthly Mail, which served Campbell County, Tennessee and Whitley County, Kentucky. Lettie has done volunteer work for the Community Action Committee in Knoxville. The Steelys moved to Knoxville 18 years ago and Mike worked for Charter Media and wrote a column “A Day Away” for The Focus before becoming a reporter for the newspaper.

The couple enjoys traveling and have been in every state except Alaska. They have also visited every state park in Tennessee. They collect cups and buttons from places they have been and enjoy time with their grandchildren.