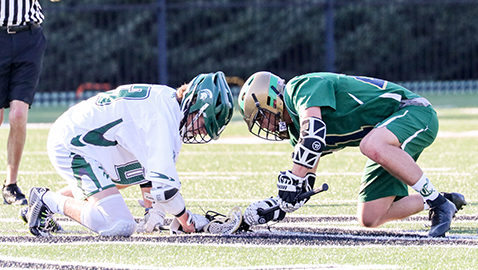 The old Catholic versus Webb rivalry can still be seen in a couple of sports.

The two schools played against each other in home-and-home volleyball matches last fall, and the Spartans hosted the Fighting Irish in lacrosse Wednesday at David Meske Stadium at Webb.

“It’s a spirited rivalry and we’ve worked really hard – and I give a lot of credit to both my players and my staff and Catholic players and their staff – to keep it a healthy rivalry,” said veteran Webb lacrosse coach Rico Silvera after an 11-3 win that was a 2-2 tie at halftime.

“It’s one of respect, ‘I will play hard.’ At the end, we take a knee together. I’m really proud of our kids and their kids and it was just a great night for lacrosse.”

Webb versus Catholic – one of Knox County’s best high school football rivalries for years – was halted several seasons ago. The two schools, which are not much over a mile apart from each other, also were not scheduled to play each other this school year in basketball, baseball or softball.

But the boys from Catholic and Webb got after each other again in lacrosse last week … and it was fun to see!