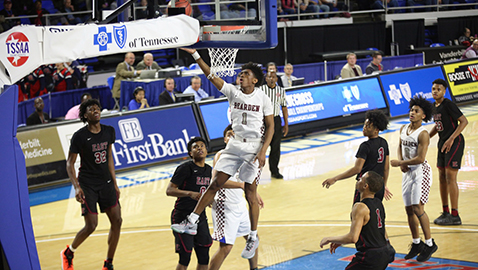 The third time was the charm.

Playing in the TSSAA state tournament for the third year in a row, Bearden loaded its first gold basketball in school history for the trip back to Knoxville.

The past three years, the Mustangs had left town with the gold ball. A fourth time would have been a state record.

The difference this season was easy to see. Memphis East had a star. Bearden had more than one.

Parrott called the championship moment “amazing” as he was interviewed on courtside at MTSU’s Murphy Center after the game.

“Memphis is a basketball city,” he said. “Everybody knows that. The stranglehold they’ve had on it (state titles) has been impressive, and to finally get to wrestle it away from them for at least a year, it’s real humbling.”

It was fitting the 1-2 punch of Ques Glover and Trent Stephney, the Bulldogs’ outstanding pair of senior guards, led the way. Glover scored 24 points and Stephney 22 in their finale.

Shamarcus Brown, Bearden’s 6-5 senior power forward, may have saved his best for last. He totaled 15 points, 10 rebounds and three blocks plus was six for six at the line.

Glover was selected tourney MVP and four of the five senior starters made the all-tournament team. Robinson easily could have too, but he had the honor of adding the period – not an exclamation point – to the end of the championship season with a classy layup in the closing seconds.

James Wiseman, Memphis East’s 7-1 center who reportedly was the No. 1 recruited player in the nation this season, powered the Mustangs with 24 points, 11 rebounds and five blocks. The Memphis signee fouled out with 1:16 on the clock. He took a seat at the end of the bench and broke down and cried. He wanted this title that badly.

The Mustangs had two costly stats. They were guilty of 18 turnovers and made only four of six free throws.

Thirty-two of Bearden’s points came off East turnovers and Coach Parrott said his team really didn’t press that much.

“It was more token, a lot of stunting and things,” he explained. “It kind of messed with them a little bit and it worked in our favor.”

East jumped out to a 19-10 lead in the first period. Bearden fought back and led 32-31 at halftime. The Bulldogs had a six-point lead (51-45) after three stops and outscored the Mustangs 32-23 in the final eight minutes.

East got within two points in the final period (58-56) on Wiseman’s fifth dunk of the game. But a key rebound by Brown led to a 3-pointer by Robinson. Brown then sank four straight free throws, with the last two coming after Wiseman picked up his fourth foul, and the Bulldogs’ advantage was up to seven (65-58).

Following a traveling violation by Haywood, Glover hit two free throws to make it 67-58 with 2:56 left.

Fulton was going after its fourth TSSAA state championship and had the lead at halftime, but Memphis Wooddale pulled away after intermission and won 59-46 in the Class AA finals Saturday in Murfreesboro.

“It was a game of runs,” said Wooddale Coach Keelon Lawson, adding that Fulton had a run in the first half and his Cardinals made their run after halftime.

The Lawson brothers – Chandler and Johnathan – led Wooddale (33-4) with 16 points each. The 6-8 Chandler Lawson, an Oregon signee, also had 11 rebounds. Johnathan is 6-7 and a sophomore. Alvin Miles added 11 points.

Fulton, which led 29-23 at halftime, got 19 points from senior Trey Davis and 10 from junior Edward Lacy.

Fulton cheerleaders were honored with the Spirit Award for good sportsmanship.