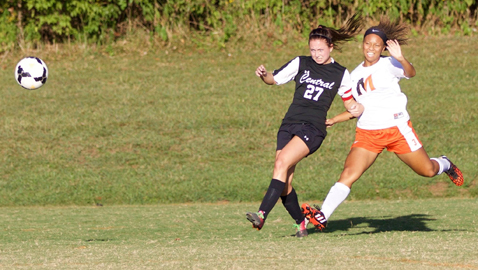 By Steve Williams
For the first time in her high school career, Bailey Maybrier got to play an injury-free soccer season as a senior last fall.
And she made the most of it.
Maybrier set school records for goals scored (32) and goals and assists combined (46) as Central’s offensive player of the year, helping lead the Lady Bobcats to their best season ever on the field.
Central’s regular season record was 16-0-1 and the Lady Bobcats advanced to the semifinals of District 3-AAA tournament with a first-round bye and quarterfinal win over Gibbs before falling to Oak Ridge 1-0.
“The thing I will remember most from my senior year is all the records that I broke along with the team, and of course the friendships,” said Maybrier, who was named the CHS female Student-Athlete of the Year. “My senior year was my only full season. That’s what makes this season so great for me also, because I actually stayed healthy.”
Maybrier was team captain and earned first-team All-District 3-AAA honors.
In addition to being voted Most Athletic among senior superlatives, Bailey was an honor student and a National Honors Society officer. She was a member of the Student Council, Spanish Club, yearbook staff and Bob Squad, a volunteer service club.
Maybrier’s plans for the future are to get a bachelor’s degree in Business/Marketing. She is using the TN Promise for her first two years of college at Pellissippi.
Trey Mitchell, senior quarterback for Central’s Class 4A state runner-up team, was tabbed the school’s male Student-Athlete of the Year.
Trey is the son of Carol Mitchell, who has coached Gibbs to 10 state titles in softball, and Mitch Mitchell, a former college and high school basketball head coach.
Trey earned All-State honors in football as a senior and was a two-time Region 2-4A honoree.
Mitchell also was a standout in basketball, earning All-District 3-AAA honors three times and All-Region 2-AAA honors two years. He set a school record for 3-point shots made in a game (10) at Elizabethton this past season.
Trey ranked in the Top 10 percent of his graduating class with a 4.3 GPA. He received the Johnny Mauer Award and was a National Football Foundation Scholar and Careacter Star Athlete.
Mitchell devoted time to community service as well, including peer tutoring students with special needs and mission work through his church youth group.
Trey’s future plans are to attend Coahoma Community College on a full football scholarship.

Karns recognizes Fisher’s ‘commitment and work’
All-District 3-AAA Trinity Fisher, who ranked No. 2 in scoring among Knox County basketball players this past season, is Karns’ female Student Athlete of the Year.
“Trinity averaged 18.2 points per game and about three to four steals a game,” said Karns Head Coach John Marsh. “She scored over 30 points on three different occasions her senior year. Against Central she had 28 points, eight steals and seven rebounds.”
Fisher, who signed with Bryan College in Dayton, scored over 1,000 points in her four years at Karns.
“Trinity didn’t miss a game or a practice in the two years I coached her,” added Marsh. “She was the first one to practice and the last one to leave, still shooting 20 minutes after practice. That all speaks to her commitment and work ethic! Players like her are all too rare these days in my humble opinion.”
Karns Athletic Director Spencer Long announced Cameron Francis as Karns’ male honoree.
“He is a two-sport athlete and a well-rounded and intelligent young man,” said Long.
Francis was a defensive end and wide receiver for the Beavers in football, totaling 54 tackles and six sacks on defense.
In track, Francis placed sixth in the KIL and 10th in Class AAA Section 1 in the 110 hurdles with a time of 17.0.
Cameron also was an honor student with a 4.13 grade point average.