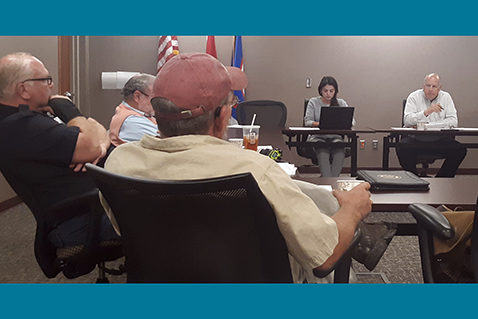 The group was scheduled to meet last Wednesday and, while most of the members attended, not enough were present to have a quorum and no vote could be taken. Dwight Van de Vate, sitting in for Knox County Mayor Glenn Jacobs, opened the meeting.

He noted that October may not be a good month to hold a meeting because members were out during Fall Break, noting that one member was attending a government meeting in Murfreesboro and another was on a cruise.

The Focus covered the meeting and Van de Vate noted that in two years of meetings last week’s meeting was the only session not to have enough members present to hold an official meeting. He also noted that it was a meeting that included a member of the press. The comment got a laugh.

On the agenda was a discussion of the ambulance contract. The current contract with American Medical Response will expire next year and the mayor has called on taking requests for proposals for a future contract. That contract expiration may be extended until January 2024, to give a time period if the ambulance provider chosen is someone other than the current provider.

Van De Vate said that the search for an ambulance provider has gone national and is getting a good response. AMR has indicated it will also respond to the invitation for proposals. While the Fire and Technical Rescue Committee will have little input in the selection, the group is following the process. He said the request for proposals will include a closer look at the applicants including persistent response issues.

He also said that the search continues for a Public Service Director and there are 40 applicants. Those applications close on October 22.

The committee is also awaiting a fire study now underway and discussed, briefly, the fire and rescue response to the fires in the neighboring Claxton community in Anderson County. The community has a part-time volunteer fire department but the Karns Fire Department and AMR often respond there.

Chief Jerry Harnish from the Rural Metro Fire Department phoned into the meeting and talked briefly about the effect of the Covid pandemic on first responders in the region.

“Everything is clicking along pretty well,” Van De Vate told the meeting, adding that a report may be made to the Knox County Commission before the end of the year.

Members of the committee include the various chiefs of each fire and rescue organization including the Karns and Seymour Fire Departments, Rural Metro, the Knox Rescue Squad, an Emergency Communications District representative, a Knox County Commissioner, and representatives from the Emergency Management Agency, the county health and finance departments, Knox County Community Development and the mayor’s office.