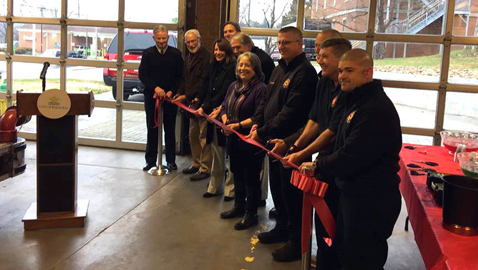 At one time the Fire Station #12 was the furthest fire station from downtown Knoxville. Built in 1930 the station was built on property owned by the Lonas family. Recently the historic old station got a complete makeover to bring it up to date and make it more comfortable for the firefighters stationed there.

Captain D. J. Corcoran told The Focus that the Lonas family had a few stipulations before allowing the fire station to be built on what is now Old Kingston Pike. Capt. Corcoran said the family wanted all the oak trees preserved, and many of the trees stand yet today.

He said that one of the other requirements was that the portrait of Samuel Richard Lonas must remain at the first station and it is displayed today above the fireplace. The Lonas family settled in what would become Knoxville prior to 1790. The early name is sometimes given as “Lones” and part of the name of Lonsdale comes from that family.

The fire station has been totally renovated. The firefighters stationed there were temporarily housed at the Lakeshore station until the project was complete. Corcoran said the walls were plumbed because they had buckled out, all the floors that had tile were stripped, sanded and varnished, and the upstairs was reconfigured to offer four bedrooms. The watch stand where firemen make their reports was moved upstairs. The kitchen was totally renovated as well.

The old station has two bays and one fire truck is stationed there. Corcoran said that three crews of three firefighters are now always stationed there on 24-hour shifts.

The city has grown by leaps and bounds since the station opened and the western end of the jurisdiction is now further away. But the historic Station #12 is updated to serve the citizens around its location.