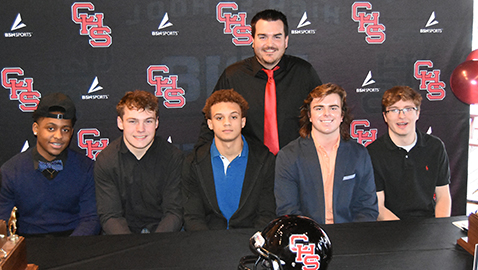 Sam & Andy’s on Broadway hosted the event Wednesday and it attracted a big turnout of family members, students, teachers and community supporters.

Central’s Jake Domermouth, a cross country runner and a distance runner in track (800, 1600 and 3200 meters), also signed with Milligan College.

“We’re extremely happy with the turnout,” said Nick Craney, Central’s new head football coach. “These guys have accomplished something really significant in earning an athletic scholarship. I’m proud of the young men that signed today and excited to see what they are going to do in the future.”

Diamond Clear Media covered the event and streamed it on line.

“He’s just very proud of the boys,” said Kelly Johnson, who was asked by Rosser to FaceTime him.

More Central football players are expected to sign in the near future after weighing their offers, including running back Jason Merritts, WR-DB Makhi Anderson and Braden Gaston, a football wide receiver and track athlete.

The top four finishers in each Division I district advance to region tournaments.

Akeem made an official visit to Rhode Island the Feb. 8 weekend and received a solid offer, according to Catholic Coach Mike Hutchens.