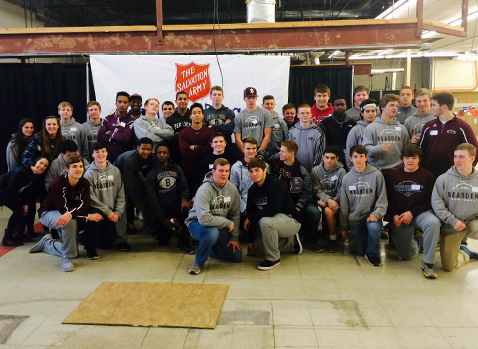 After The Knoxville Focus contacted local high school athletic directors in early December to let them know we would again be recognizing community service by their student-athletes during the holidays, we were surprised to get pictures and information about the Bearden volleyball team’s service last summer in the Lonsdale community.

That wouldn’t fit in our annual recognition of Holiday Helpers, which spotlights community service during Thanksgiving and Christmas.

But then an idea surfaced that we should start recognizing all the community service projects our high school student-athletes are involved in throughout the school year from August through May.

This reporter ran the idea by Focus Editor Marianne Dedmon and she was all for it, and pleased too that we could recognize the Bearden volleyball team’s outstanding service in Lonsdale last July.

We emailed the ADs of our new plan and received three more submissions for recognition.

In the 2023-24 school year, we’ll begin by running first-semester community service stories in mid-November and follow that with recognition of the Holiday Helpers in December.

We are running the new community service under a heading called Helping Hands.

If any athletic directors or coaches from the 25 high schools in The Focus’ coverage area have any comments or questions, please let us know.

THE FOCUS first started running stories of high school student-athletes’ community service during the holidays in 2013. We started calling it Holiday Helpers in 2016, the year following the destructive wildfires in the Gatlinburg and Sevier County area.

That December, Focus Editor Marianne Dedmon emailed me a message that read: “I am thinking there should be a good response to your emails due to the wildfire damage and the community really coming together!”

Dedmon was correct, as Luke Benson, then the athletic director at Tennessee School for the Deaf, told me one of his teams had gone shopping during the holidays and gave the gifts to a TSD family who lost their home in the Gatlinburg fires.

That’s just one of many wonderful community service stories we’ve heard about our high school student-athletes over the years.