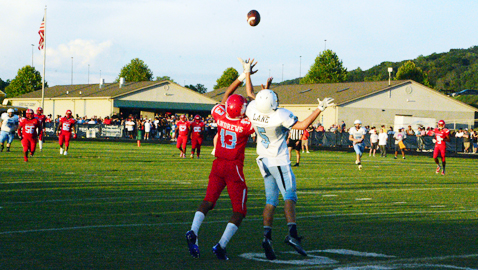 The sultry night certainly didn’t dampen the spirits of local fans as the four one-quarter games were played before a near-capacity crowd.

“It’s been a long camp,” Hardin Valley coach Wes Jones said. “This was great for a lot of our kids because this was their first time to play in that Friday night atmosphere.”

Austin-East head coach Jeff Phillips agreed despite seeing his squad manage just eight yards of total offense in a 0-0 tie against Gibbs (which had just 55 yards in 12 minutes).

“Any time you get a chance to put on the game jerseys and walk through the halls; that’s a good thing,” said Phillips who will begin his fourth season as coach at his alma mater when the Roadrunners open their 2016 campaign at home Friday night against Scott. “It’s good to get out here and play in a game.

“It’s been a long summer for all of us.”

In other games: Central 7, Hardin Valley 7: Jones had to like what he saw from the host Hawks Thursday night.

HVA, which went 5-6 last season, darted to an early lead against the Bobcats when Gavin Greens threw an 11-yard touchdown pass to Thomas Clay.

For Jones and Greene, it was more than just a mere short scoring strike. Greene didn’t get to play in the jamboree last season. He suffered a season-ending broken leg in a scrimmage just days before the 2015 event.

“It’s great to have him back,” Jones said of Greene. “He’s the one person that I wanted to go out on the field and give a hug [after the touchdown] because he got hit on that touchdown  and that was the first time that he’s really been stuck since he got hurt last year.

“He got bumped a little before that, but that was the first time he really got stuck because we’ve literally not let him get hit.”

Contact with Greene was off limits during preseason workouts after he had a long road back.

Also for the Hawks, senior running back Tim Frizzell rushed for 30 yards on two carries. Frizzell, who also plays linebacker for Hardin Valley, missed the final three games last season after he sustained a concussion.

The Bobcats, who won nine games last season, open next week at South-Doyle. The Cherokees endured a winless 2015 campaign after making a deep playoff run in 2014.

Carter 7, The King’s Academy 7: Hornets quarterback Dakota Fawver threw a two-yard touchdown toss to Caleb Wolfe to give his squad the lead midway through the frame.

Carter will host Halls Friday night while TKA will travel to face in-county foe Seymour. The Eagles went 7-4 and made the playoffs under Coach Jerry Cooper.

Martin was 6-for-9 with 90 yards and he later connected with Thashad Thrasher on a 24-yard scoring strike for the Mavs, who host Greeneville this week. ACHS went 3-7 and missed the playoffs last year

Powell quarterback Shawn Shrieve also threw two touchdown passes for the Panthers (1-9 in 2015), including a 9-yard toss to Nick Moore as time expired.

The Panthers open their 2016 season against Farragut at Bill Clabo Field on Friday. The Admirals routed Powell 49-6 en route to going 10-2 and winning the Region 3-5A Championship last season.

The Kick-Off Classic continued with five games at West High Friday night. Results were not available at press time.