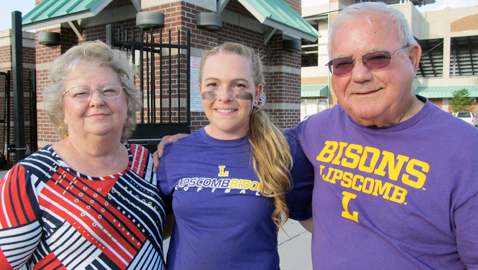 The story of Baylee Williams’ softball career could be inspiring and motivating for some young and small players taking up the game.

“I was maybe 7 years old when I first started playing and probably the smallest on every team,” said Williams. “Just an average player, then all of a sudden I started peaking. I worked hard for what I’ve done and obviously it has paid off for me.”

The former Farragut High MVP went on to earn All-America honors at Chattanooga State Community College and now has only a few games left to play as a senior at Lipscomb University.

Williams and the Bisons from Nashville were in Knoxville April 23 and 24 to play three games in the Tennessee Invitational. Baylee played shortstop and batted in the clean-up spot for Lipscomb, which defeated Radford 1-0 and lost to Oklahoma 2-0 and Tennessee 10-2.

Williams went 0 for 9 at the plate in the three games but quickly got back on track last Tuesday as she went 2 for 3 with a double and three RBIs and scored two runs in a 10-1 win over Tennessee State back in Nashville. That boosted her average to .271.

Prior to the opening game in the UT tourney, Williams, surrounded by grandparents Darlene and Larry Williams, reflected on her career, which included two years at Valparaiso High, where she was the Indiana Batting Champion in 2010 before transferring to Farragut.

Obviously, it didn’t take long for Baylee to learn about the Bearden-Farragut rivalry as she said her fondest memory of playing at Farragut was “crushing” Bearden in a post-season tournament game her senior season.

Williams’ grandfather pointed out her “shattering the school record for doubles with 27 that season.”

The two-time All-KIL and All-District 4-AAA middle infielder went on to help lead Chattanooga State to third place in the NJCAA tournament in 2014 and was a two-year NJCAA Region 7 All-Academic honoree as well.

A personal highlight in her first season at Lipscomb she said was belting a home run in a loss to No. 2 ranked Michigan.

Scott Williams, Baylee’s father, and his wife Lisa also were on hand at the UT tourney to support their daughter and are very proud of her accomplishments.

“The places that she’s been, the people that she’s met, it’s just hard to imagine her having those opportunities hadn’t she played softball,” said Scott. “It’s been a great experience for her and also for us as parents.

“She’s probably played in the neighborhood of 200-plus games in her college career and we’ve probably been to 190 of them.”

Baylee’s playing career is nearing an end, but softball may remain in her future.

“I’ve done this all my life and now that it’s coming to an end, I’m kind of looking forward to beginning another stage in my life,” she said. “It has definitely made me grow up and taught me a lot of lessons in life.”

Williams is a communications major.

“I don’t really know what I want to do with that yet, but I kind of want to go back to Farragut and maybe start coaching and helping out Coach (Dave) Moore.”

Moore, who has been head coach at Farragut since 1991, was at the UT tourney to watch Williams.

“Baylee is just an outstanding young lady,” said Moore. “I’m proud of her accomplishments. I think she would be a great coach. We’re always looking for good help. Baylee would be a good one.”