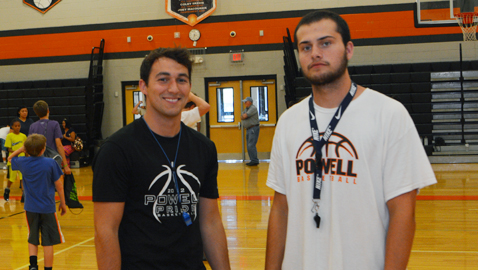 They both graduated from high school recently. During their time at the middle school, they won a James A Ivey Jr. Memorial Middle School Tournament Championship in 2012.

From there, Hamilton and Cowden moved on to Powell High School, where as seniors they were on a team that knocked off Bearden High School in the Region 2-AAA quarterfinals.

With their basketball careers and high school days in the rear-view mirror, Hamilton and Cowden will soon go their separate ways.

But they had one more order of basketball business in Powell before heading off to college. The two fulfilled a request from Powell Middle School coach Darin Courtney and worked at the coach’s annual Powell Pride Boys Basketball Camp last week.

“Coach Courtney texted me and told me there was an opening to work the camp and I told him I would do it,” said Hamilton, who will soon begin attending East Tennessee State University where he will major in engineering. “Really for me, it’s about giving back.

“It’s about giving back to the kids. It really means a lot to come back and show these kids how to play the game. A lot of them were in the crowd watching us play when we were in high school.”

Cowden, who will major in microbiology at the University of Tennessee, is no stranger to coaching. He also had the chance to play basketball at Centre College in Danville, Kentucky but opted to stay home and not continue to play basketball in college.

“The last two seasons I coached a Powell [youth] all-star team and we won the Knox County Championship,” said Cowden, who currently works for Cricket Wireless.  “I had a chance to play basketball at Centre College but I didn’t want to play.”

He said he still enjoys the game and will likely participate in intramural basketball at Tennessee.

“I’ll probably play intramurals,” he said. “I enjoy playing pickup games and I work out every night.”

“I plan on coming back and helping out whenever I can,” Cowden said. “I was here for the 3-on-3 tournament and I’m here today.”

He also played football for the Panthers in 2015.

Hamilton has fond memories of his middle school playing days and noted that things have pretty much stayed the same since he was a player at the camp.

“Nothing has really changed,” he said.

Both Hamilton and Cowden are basketball fans. Hamilton roots for the Cleveland Cavaliers while Cowden pulls for the New York Knicks.