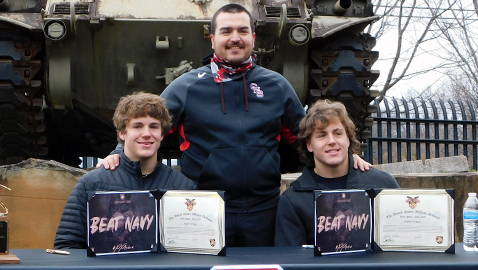 With a tank right behind them, the two Central High standouts signed their national letter of intent Thursday to continue their academic and athletic careers at the United States Military Academy at West Point.

The signing ceremony was held outside the Regimental Headquarters of the 278th Armored Calvary Regiment of the Tennessee Army National Guard at 3330 Sutherland Avenue.

Family members, friends and CHS representatives and coaches were on hand for the event, which started just after noon on a cold, cloudy day.

Central Head Coach Nick Craney started the ceremony by praising the Fortners’ contributions to the team, program, school and community during their prep careers.

“There are so many young kids that you don’t realize the impact you have made on them just by being the young men you are,” he said.

The two gold footballs the Fortners helped the Bobcats win in the 2018 and 2019 Class 5A state championship games decorated the signing table.

As Kalib and Liam began signing their NLI papers, “Go Army, Beat Navy” was shouted from the crowd.

Kalib, a Mr. Football finalist this season, expects to continue to play outside linebacker at Army. Liam, who played wide receiver and strong safety and also ran a lot out of the wildcat position, expects to be a receiver for the Black Knights.

Both are undecided about their major but expect it to be in the engineering field.

“Ever since we played football, we wanted to start and finish together,” said Kalib. “Going back to our junior year when the recruiting process was starting to kick in, we talked about how awesome it would be to play at the next level together.

“When Army sent us both the offer, (considering) just the benefits that come from a military academy, it was a no-brainer that we were going to finish together.”

“I never had an interest in playing football there,” continued Liam. “I always had interest in being a cadet and student just because of the benefits and all the doors that are open. But it never crossed my mind that I would be able to play football at such a prestigious school.”

Their parents, Shane and Heidi, have a military background, having met in Greece in the early 1990s while serving in the Navy.

“I think it’s a great opportunity for them,” said Shane. “We’ve always taught them to make their own way and to follow their heart and their dreams and this just gives them another opportunity to play football and to go to one of the most prestigious schools in the United States.”

With her background in the Navy, Heidi laughed when asked if it would be hard to pull for her sons at Army.

“I’m their biggest fan,” she answered, “so it doesn’t matter where they’re at. That’s who I’m pulling for every time.”