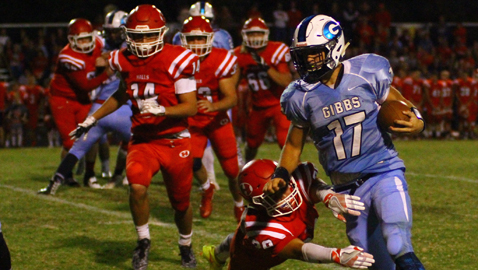 The quarterback position is so important in football and that was very evident as Emory Road rivals Halls and Gibbs battled Friday night in Corryton.

Caden Harbin, the Red Devils’ talented and versatile senior QB, helped get Halls off to a fast start and early lead but was sidelined with an injury midway through the second quarter and never returned.

Fortner, a 6-foot, 190-pound senior who started at middle linebacker the past two seasons, contributed significantly to Gibbs’ physical style of play. He even blocked a field goal to keep Halls from expanding its 10-0 lead late in the opening quarter.

“This win means everything,” said Fortner. “We own Emory Road and I hope it stays that way for a long time.”

The win on Senior Night lifted Gibbs to 3-0 in Region 2-5A and 4-3 overall. The Eagles currently have sole possession of first place in their region and play a key game Friday at South-Doyle (2-1, 4-3). The Cherokees are coming off a big 22-10 win over West.

Halls (1-2, 4-2) will host Central in the Battle of Black Oak Ridge this Friday. The Red Devils will return to region play in a TV game at Powell on Oct. 13.

“Anybody that’s lived around here knows this is a huge rivalry,” said Gibbs head coach Brad Conley. “The truth of the matter is in football we haven’t always come out on the right end. I felt like last year we let one slip away. They played great and we didn’t play our best. We felt like we needed to come out here tonight and play a better ball game. They started fast. Our kids didn’t give up. I’m really proud of them.”

Harbin was on the passing end of a Halls touchdown on the game’s first play from scrimmage.

He tossed a screen pass to Matthew Runge Gold, who sped 67 yards to paydirt. Briggs Marcantel’s PAT kick made it 7-0 with only 22 seconds off the clock.

Gibbs went three and out and JT Freels took the Eagles’ punt to the house, but the score was nullified by a block in the back. The Red Devils also were assessed an unsportsmanlike conduct penalty, which put them back at their 12-yard line.

Halls drove to midfield before Harbin executed a rugby punt. The Eagles were penalized for roughing the kicker and the Red Devils’ offense got a fresh set of downs.

A holding call on the Gibbs defense followed by a personal foul late hit on Harbin gave Halls first and goal at the 9. The Red Devils couldn’t overcome a holding penalty and settled for a 32-yard field goal by Marcantel.

Gibbs muffed the kickoff and Sheldon James recovered to keep the Eagles’ offense on the sideline. Halls picked up a first down on a 10-yard run by Cooper Cook but once again had to settle for a field goal attempt. The 34-yarder was blocked by Fortner with a minute to go in the quarter.

The Eagles’ well-rested offense responded. Noel Leyva broke loose for a 46-yard gain and Demarcus Hight scored from the 4 on a pitch left. Gabe Martin’s PAT cut the Halls lead to 10-7.

All of a sudden, the Eagles had come alive.

A pass interference call on Gibbs let Halls out of a hole, but three plays later, Bailey Sivyer picked off Harbin’s last pass in the game at midfield.

Fortner ran 18 yards to the Halls 15 and a dead ball unsportsmanlike penalty on the Red Devils moved the ball to the 7. Fortner faked a handoff on a dive play and kept it for the go-ahead TD with 5:45 showing on the second quarter clock. It was 14-10 Gibbs.

Gold had a long return on the ensuing kickoff but a personal foul brought it back to the Halls 26.

On its first possession in the second half, Halls called a timeout on fourth-and-2 at its 41 and appeared to be going for the first down. A false start, however, pushed the ball back five yards and forced a punt.

A 12-yard pass from Spoon to Sean Maddigan gave the Red Devils a first down at the Gibbs 41 late in the third quarter. Dalton Rodgers, however, recovered Cook’s fumble on the next play to end the threat.

Dalton Wright intercepted a first down pass by Spoon at the Halls 48 and the Red Devils would not get the ball back again.

Fortner took a knee at the Halls 4 on the game’s final play.