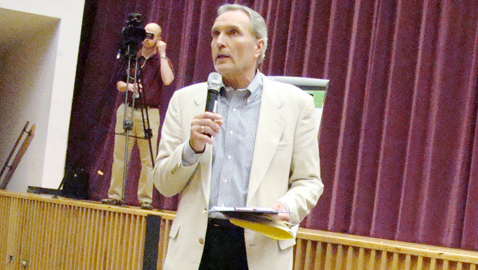 Interim Knox County Schools Superintendent Buzz Thomas makes it no secret that he wants the community involved in the process to find his replacement. He and some members of the board of education hosted a public forum to seek some public input on the matter at Central High School Thursday night.

And while the meeting wasn’t heavily attended, it accomplished exactly what Thomas wanted.

“We didn’t have a big crowd but we had a good discussion,” Thomas said. “We had a good conversation. I’ll bet we probably had about 50 people.

“I didn’t know how well this would be attended because we didn’t have a lot of lead time.”

Thursday night’s forum was the first of two that are scheduled to seek public comments about the search for a new superintendent. The second will be held at Bearden Middle School Tuesday at 5:30 p.m.

“We didn’t have a lot of lead time on this because we wanted to wait until we elected a new [school board] chairman,” Thomas told the attendees. “As you know, we didn’t elect a chairman at our last meeting.”

Thomas noted that he expects a bigger turnout Tuesday night because that forum will be held in conjunction with a PTA meeting at Bearden Middle. He noted that people can provide feedback via the internet soon and said that the county has yet to compose a list of potential candidates.

That process will begin when the board members take their annual retreat in October. He said that those meetings will be open to the public as well.

The meeting at Central may have been sparsely attended. But teachers, parents and others showed up to voice their concerns. And Thomas and the board members presents listened.

The people in attendance made it clear that they want to put the county’s children first. Some pushed for more Career/Technical Education classes. Others called for a return to the basics and some called for more support for the arts; but all seemed to agree that the new superintendent needs to have classroom experience.

The people also agreed that the new leader for the school system must have strong communication skills and that the new superintendent must put the needs of the students ahead of the need of those of the school district.

There was also a call for teacher autonomy.

Heather Wallace, a former teacher in Knox County who was once vice president of the Knox County Education Association, called for teacher empowerment.

“We need to worry less about the demographics of it and worry more about the fact that they need to put the focus on the kids,” said Wallace, who now teaches in Jelico but has two children in the Knox County system. “They need to give teachers autonomy to teach in their classrooms, to teach the curriculum.

“The way I taught at Lonsdale was way different then the way that [current KCEA President] Lauren [Hopson] taught at Halls because my kids needed something different than her kids did because of where they came from. As a teacher and a professional, I know that. Any professional worth the salts know that.”

The opening public comments came from Carl Wheeler. He is a Knox County resident who had two children go through Knox County Schools.

His list of qualifications stated that the new superintendent must have at least five years of classroom experience; high moral character; the ability to collaborate and a focus on engaging the community.

Wheeler also voiced his desire that the new superintendent must come from outside Knox County.

Many agreed with Wheeler’s opinions but some noted that Knox County has its share of qualified candidates.

Knox County education advocacy group Students, Parents and Educators Across Knox County (SPEAK) called for an end to so-called “high-stakes testing” and articulated that inappropriate standardized testing is a factor in teacher turnover and student stress.

For her part, Hopson commended Thomas for being transparent.