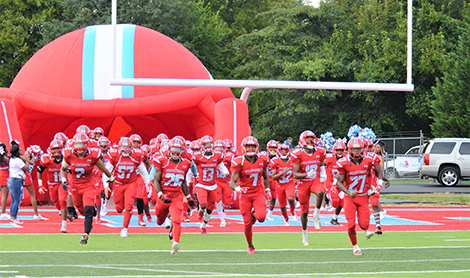 The first quarter couldn’t have gone much worse for Austin-East High’s football team in its season opener Friday night.

But quarterback Trey Foster and a trio of receivers hooked up for three big-play touchdowns before halftime, sparking a 30-12 win over Gibbs.

Maybe it was the new artificial turf at Sam Anderson Field that made the Roadrunners look so fast. Whatever it was, the Eagles had a hard time catching up and stopping A-E in that game-changing second quarter.

Austin-East will travel to Wayne, Ohio in Week 2, while Gibbs has an early season open date before hosting South-Doyle, another swift team, in a Region 2-5A game in Week 3.

Coach Jeff Phillips liked how his Roadrunners battled through adversity in the early going as they had three turnovers and saw standout Isaiah Ligon slowed by an ankle injury.

“Defensively, we played really good,” he said. “That’s what I was happy about. They got in close and we kept playing hard.”

After Gibbs failed to take advantage of recovering an onside kick at the start of the game, the Eagles took a 6-0 lead midway through the first quarter when senior Gavin Collins intercepted a tipped pass and returned it 45 yards to score.

The A-E offense got the bugs out in the second quarter and Foster led a 22-point flurry, hitting Dontae Daniel (75 yards), Shi’yana Jackson (58 yards) and Ke’on Smith (43 yards) for touchdowns.

“He showed that he can play well,” said Coach Phillips. “It’s good to see Trey do that, a young guy as a junior come in and step up.”

After a scoreless third quarter, Austin-East netted two points when Gibbs snapped the ball over its punter’s head and he kicked it through the end zone, resulting in a safety.

A 47-yard punt return by Kobe Wilson set up a 13-yard touchdown keeper by Foster with nine minutes left, making the score 30-6.

A fumble recovery by Amauri Adams ended Gibbs’ next possession.

Reserves for both teams played the final four minutes and the Eagles tacked on a 5-yard touchdown run by sophomore Keegan Katz.

Commenting on A-E’s three big scores in the second quarter, new Gibbs head coach Brad Turner said: “We had some blown assignments in the secondary. It just came down to tackling.”

Turner was upset with his team committing a couple of unsportsmanlike conduct penalties in the game and said that would be a focus in the off week.

“We’re not going to have penalties for unsportsmanlike,” he said. “We’re going to play the game the way it’s supposed to be played. We’ve got to do that first before we do the Xs and Os.

“We get the onside kick and we’re moving in ready to score and take some momentum,” Turner recalled, “and we get an unsportsmanlike out of bounds call.”

Ligon did not play in the second half and was on the sidelines wearing a boot on his injured ankle.