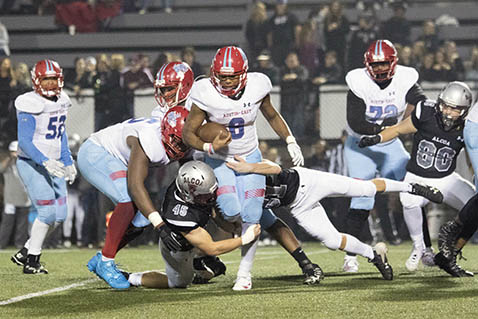 Like the Baltimore Ravens’ Jackson, the NFL’s top candidate for MVP honors, the Roadrunners’ talented senior excelled as both a runner and passer, piling up yardage and touchdowns.

For Foster’s impressive offensive production, he stands out on The Knoxville Focus / Coaches’ 2019 All-Knox County team.

“Trey worked really hard in the off season to get better,” said A-E Head Coach Jeff Phillips. “It showed up this year with his production. I’m really proud of him. He does everything the right way and it’s good to see someone have that success.”

The All-Knox County squad this year has a second team along with players who received honorable mention. All 18 TSSAA-member schools with football programs in the county are represented.

The selections were based on a combination of coaches’ nominations, final season statistics, teams’ overall records and The Focus’ first-hand observations.

The first-team honorees will be receiving certificates from The Focus in the near future.

Central, which repeated as the Class 5A state champion, leads the way with nine players on the first unit. Powell, West and South-Doyle, each in the running for Class 5A state honors this year, have five each, while Catholic, Grace Christian and Hardin Valley each have three. In all, 15 schools are represented on the first team, which includes 47 players.

The Focus also has named Dakota Fawver of Central and Jordun Wilson of South-Doyle as honorary captains of this year’s team.

Fawver, the Bobcats’ senior quarterback, also had impressive overall numbers, passing for 2,879 yards with a Knox County-high 30 touchdown passes and only six interceptions in 15 games.

The offensive unit also includes a fullback-type runner in Gibbs’ Ethan Humphries, who gained the third most rushing yards (1,433) this season behind Young and Foster.

There’s not a lot of stats to go on for the big guys up front, but Knox County’s best offensive linemen have some impressive resumes. Catholic’s Cooper Mays and Bryn Tucker already have signed scholarships with Tennessee and Clemson, respectively.

Defensively, Central outside linebacker Kalib Fortner was a terror for the opposition, recording 34 tackles for loss and sharing the lead in sacks (10) with teammate Eunique Valentine and West’s Tyrece Edwards. What’s more scary is the fact that Fortner still has a senior season to haunt more QBs.

Max Smith of Christian Academy of Knoxville was in on 147 tackles, earning the senior Warrior a spot among the linebacker corps.

Three all-around players are listed on the first team as “athletes,” including Powell’s Bailor Hughes, who had Knox County’s best punting average (41.8 yards) and three interceptions as a defensive back in addition to shining as a running back and punt and kickoff returner for the Panthers.

CAK’s Zander Tonkin is among the team’s three specialists in the kicking game. He was successful on 14 of 15 field goal attempts with his longest being 51 yards.