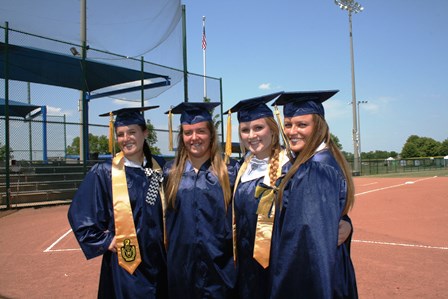 The four senior members of Seymour’s softball team did not win a game in the Class AAA state tournament as their high school careers came to an end last week in Murfreesboro, but they didn’t go home empty handed.

They got their diplomas.

Instead of walking across the stage at LeConte Center in Pigeon Forge as their classmates did in SHS’s graduation commencement Tuesday night over 200 miles away, catcher Reid Ballard, third baseman Taylor Erjavec, centerfielder Bailey Pierce and pitcher Samantha Trentham, wearing caps and gowns over their softball uniforms, walked to home plate at Starplex Field No. 1 prior to their first game in the state tourney to receive their diplomas.

“Most high school students look forward to hugging their principal as they cross the stage, but we hugged Coach (Jessica) Sterling as we walked across home plate and it’s going to be a memory that I tell people about for a very long time!”

The Lady Eagles didn’t know they were going to the state tournament until they won at Hardin Valley Academy in the sectional round Saturday, May 21, three days before graduation day and the start of the tourney.

Coach Sterling and Athletic Director Gary Householder saw the schedule conflict ahead and wanted to do something special for the seniors, whom looked forward to graduating together but at the same time knew they would not be getting to graduate with other friends in their class.

Householder made a call to the TSSAA state office last Monday morning to make sure it would be okay to have the pre-game ceremony.

“They said it would be fine and that they would provide a microphone and speaker in the press box for us to use,” said Householder. “The TSSAA was very cordial and offered to afford help. They were very receptive to it.”

The ceremony began 1 hour and 20 minutes before game time. Dr. Jack Parton, Director of Schools for Sevier County, and Mr. Charles Temple, Seymour School Board member, were on hand to pass out the diplomas to the players as they crossed home plate.

Dickson County players were in the third base dugout and “clapped” as each diploma was awarded, said Householder.

“Our girls were excited about doing it, and all the parents were glad for them to get a ceremony,” Householder added.

A video also was made and sent back home to be part of the regular commencement, said Householder, with a picture of each graduating Lady Eagle appearing in the slide show on the big screen when her named was announced.

“We also videoed them throwing their caps, so when (principal) Mrs. (Kristi) Wallen addressed the seniors and they threw their caps, the girls were seen on the screen doing it also,” said Coach Sterling.

With Seymour’s game starting at 4 (CDT) in the afternoon, the senior players actually got to be the “first graduates,” pointed out Sterling. “And that evening they got on Facetime with friends and could see the graduation ceremony going on back in Pigeon Forge.”

From that standpoint, thanks to modern technology, “they kind of got the best of both worlds,” added Sterling. “I thought we made the best of the situation.”

Athletics are an extension of the educational process in high school. School rules are still in force like they were in an English or history class earlier in the day. Coaches often have opportunities for teaching moments before, during or after a game.

Academics, of course, come first in the educational process, but last Tuesday afternoon athletics chalked up an assist on graduation day.