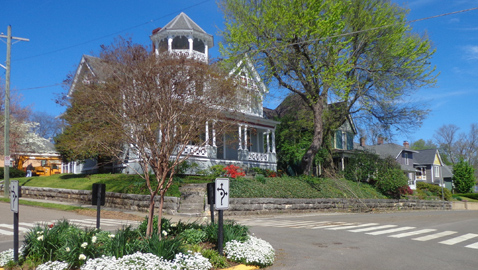 The Historic Fourth and Gill neighborhood is offering the public a chance to tour several homes and buildings there Sunday. Included in the tour are the Graystone Mansion, now the home of WATE Television, and the stately Central United Methodist Church.

Guests can leisurely walk the neighborhood to visit the featured homes or ride a red trolley bus along with a resident tour guide host.

The 27th Anniversary Tour of Homes will probably attract more than 700 guests who will visit eight to ten residences. The Tour of Homes is a sponsored event and the revenue allows the installation of new banners along the line, installation of a mini-art gallery in the neighborhood park, purchase of street signs that display a historic district symbol, and other beautification efforts.

Jennifer Wright, president of the Historic Fourth and Gill Neighborhood Association, is inviting people to the event. The neighborhood hosted a cleanup recently in preparation for the Dogwood Arts Festival, the Covenant Health Knoxville Marathon, and a large neighborhood yard sale.

Wright told The Knoxville Focus the tour begins at the Methodist Church at 201 Third Street at 1 p.m. April 23. Tickets through April 22nd are $10 and will go to $12 the day of the tour when purchased at the church. Online tickets can be found at  www.fourthandgill.org under the “Tour of Homes” tag. The tour ends at 6 p.m.

Tickets can also be purchased at Three Rivers Market, Bliss, and Bliss Home.

“This oldest home on this year’s tour was built in 1886. Home styles range from Victorian, Craftsman, Queen Anne and Gothic Revival,” she said.

“Our neighborhood historian researches the history of every single home, poring through the records housed at the East Tennessee Historical Society. The histories, as well as photographs, are printed in a tour booklet given to guests at the start of the tour. Some tidbits from the 2017 research include one house that sat vacant from 1969 until 1984, two buildings that are on the National Register of Historic Places and one home that stayed with one family for 74 years,” Wright said.

Five neighborhood artists will also be featured on the tour. Guests can see unique works such as collages, freeform sculptured wood bowls, items created by a sewing cooperative of refugee women and even more.

The Central United Methodist Church will feature two concerts by the church’s organists, one a Fourth and Gill resident, at 2 p.m. and at 4 p.m. The neighborhood’s Facebook page will have updates about the event and the homes leading up to the tour.

“Our planning team has been working hard on this for months and we are excited about the tour,” Wright said.