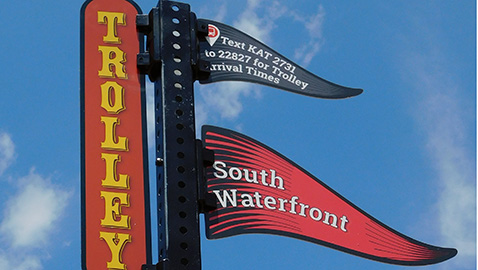 One week ago something happened in Knoxville that will create commerce and visitation between downtown and the South Waterfront. That Monday the Red Line Trolley began serving the area via a looping route from the Trolley Superstop on Main Avenue south across the Gay Street Bridge, west on Blount Avenue, then north across the Henley Bridge back to Main.. The Red Line is a circle of free transportation that begins and ends in front of the City-County Building.

Why the need to add the additional trolley route?

A growth spurt is happening on the other side of the Tennessee River. After being wounded by the closing of the Henley Bridge for repairs a few years ago, South Knoxville and especially its waterfront is nowadays booming with business and new residents.

The Red Line Trolley serves the growing residents and businesses in the area. The growth began with the construction of a mixed use complex at the former Baptist Hospital at Blount and Chapman Highway. Also underway is the work on a three-mile river walk from City View Apartments west of the Henley Bridge down Blount and Sevier Avenues to River Edge Apartments near Island Home. Regal Cinemas is now headquartered in one of the former Baptist buildings on Blount and there are now coffee houses, pizza restaurants, and craft breweries along Sevier.

The public and private investments along the waterfront are drawing more residents that the city wants to lure downtown and in turn encourage downtown residents to visit the emerging area across the river.

Last week Rogero and city officials took the Red Line on its first day of operation and stopped off at Riverwalk Apartments for a visit and to take in the view from some of the riverside apartments.  One Riverwalk apartment had a sign on their lawn advertising that new apartments were available.

“It is such a convenience,” one lady said as she and her husband took the Red Line from the City-County Building to their apartment on Blount Avenue. There is a trolley stop near the Gay Street and Blount Avenue intersection and another at the south entrance to Henley Bridge.

The city hopes that employees of Regal Cinema’s headquarters and the growing number of residents on the south side use the trolley to dine and shop downtown. From the “Superstop” in front of the City-County Building, Red Line riders can connect with the other trolley lines or city buses to go just about anywhere in greater Knoxville.

The Red Line takes the route about every seven minutes, looping back and forth between downtown and Blount Avenue.  Maybe one day the Red Line might also connect Suttree Landing Park with downtown.

A few days before the Red Line began service Mayor Madeline Rogero, city and county officials, employees and citizens cut the ribbon on Suttree Landing Park improvements. The park, opened in 2016, offers river overlooks, a public LED-lit road and Riverwalk and a children’s playground. All along Waterfront Drive, located just off Sevier Avenue, is a two-lane streetscape framed drive with native plants and trees.

The Suttree Landing improvements include a new handicapped-equipped kayak launch, pavilion, floating dock, sidewalks, picnic tables and restrooms. Additional parking for the area was approved by the state recently for visitors to the area to park beneath the James White Parkway Bridge.

The pavilion is 2,600-square feet of covered area with an attached picnic area with tables and restrooms. The addition is a $2 million dollar project and expands the city’s newest park.

A Gateway Park is being developed at the terminus of the James White Parkway and will become an entry to the Urban Wilderness Greenway and the Baker Creek Preserve. While the Red Line doesn’t serve Suttree Landing Park yet it is within walking distance and the greenway will eventually connect the area of Henley Street with Island Home Park.