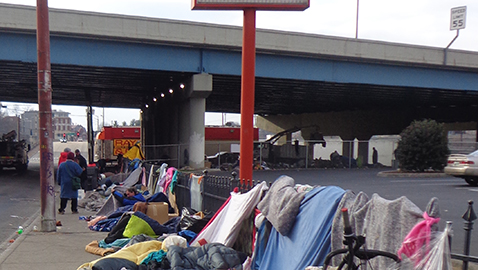 Last week’s below freezing weather played havoc with the homeless in Knoxville and strained the resources of the Knoxville Area Rescue Mission. The Broadway KARM center reported that about 360 people sought overnight shelter there on Wednesday. The mission has some needs but is stressing that it’s open and welcoming to the homeless.

Social media posts were reporting that two homeless persons were found dead in the cold and another online effort was attempting to collect new or used sleeping bags to distribute to those homeless who refused to seek warm shelter during the winter blast.

Knoxville Police Captain Don Jones told The Focus Tuesday that he had heard of the deaths but could not confirm them. He said a homeless man was discovered dead near a church downtown, but the death was before the freezing weather and apparently was from natural causes.

“If we find a homeless person dead we try to identify them and notify their next of kin,” he said, adding that until the body is identified it remains in the morgue. If not identified then the state takes possession and is responsible for interment.

Jones said that the police department checks on known locations of homeless twice a day and invites homeless to KARM. In some cases the police provide transport to the shelters.

“We can’t force them to go.  Last night under the (Broadway) bridge I noticed that KARM had the white flag out,” he said, noting that signal indicates that everyone is welcome into the shelter.

Denita McCartney, KARM’s vice president of development, told The Focus that the mission is seeing an increase in overnight stays and a jump in the number of meals served each day. She also noted that “a couple of families are staying with us.”

“Our resources are being stretched, especially utilities and food cost,” she said.

“We’re not ever going to close, it’s not a space issue,” McCartney said. “If we get to capacity we can reach out to our partners, like the Salvation Army.”

“We’re here and available with an amazing staff and volunteers,” she promised.

“KARM gives them an awesome opportunity to come in and get organized,” she said referring to the services the mission offers to the homeless.

“We have a current needs list to help KARM provide. We need things like twin sheets and washcloths. And increasingly our needs are financial.

“Please keep KARM and the homeless men and women in your prayers,” she said.