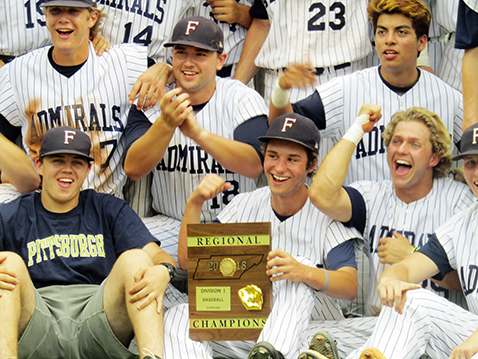 Hunter Merrick may be a 15-year-old high school freshman pitcher, but he wasn’t worried. He had confidence in his defense and Farragut’s hitters as well.

The 5-10, 155-pound lefthander did his part too, limiting highly regarded Karns to two hits in leading the Admirals to a 5-2 victory in the Region 2-AAA championship game Wednesday at John Heatherly Field.

“No sir,” answered Merrick, “because I trust my defense. I knew I would just have to come in and throw strikes. Our bats are really good, too. There was really nothing to stress about.”

Catcher Ryan McCarthy told Merrick early in the game he would be hard to hit if he threw his off-speed pitches for strikes.

“That’s what he did,” added McCarthy. “He commanded it pretty well and they couldn’t hit him.”

After giving up a tying two-run homer to Tyler Hartless in the third inning, Merrick retired 11 straight batters before issuing a base on balls in the seventh. He finished off the biggest win yet in his prep career with a pop up to first and a grounder to second.

The win gave Farragut (34-7) home field advantage against Seymour in the state sectional round, which was scheduled to be played Friday. Seymour lost to Johnson City Science Hill 7-0 in the Region 1-AAA finals.

Because of Karns’ graduation ceremonies Friday, the Beavers (30-8) would have to travel to Johnson City Saturday for their sectional game.

In first-round action of the Region 2 tourney, Farragut rallied to beat Powell 13-9 and Karns ousted Heritage 9-1.

Farragut is looking for its 10th state title and first since 2014. The Admirals’ last appearance in the state finals was 2015 when they were runners-up.

“Hunter came out and set the tone on the mound,” said Matt Buckner, who is in his ninth season as Farragut’s head coach. “He was able to change speeds and locate his pitches and kept them off balance. We were able to string some hits together and lay some bunts down. I thought we played pretty good.”

As a freshman, Merritt wasn’t a starter in district games this season, but he faced strong teams in weekend non-district contests.

“He was big today and I was real comfortable going with him.”

Karns started strong as Jonathan Nelson hit a sharp grounder past the third baseman for a double. Ryder Green, batting in the No. 2 hole and the Beavers’ most dangerous hitter, was intentionally walked.

Merrick still managed to put up a zero on the scoreboard as he fanned Hartless and induced back-to-back grounders to second.

Karns Coach Matt Hurley made the decision to remove Culp from the mound and save his arm for the sectionals, so Hartless pitched the remainder of the game for the Beavers.

Farragut regained the upperhand in the fourth as Myles McFerran scored on King’s sacrifice fly to right and Brad Grenkoski tallied when Noland beat out an infield hit. McFerran had been hit by a pitch and Grenkoski had reached on an infield single.

The Admirals added an insurance run in the bottom of the sixth when Barnes doubled off the left field fence, King bunted pinch-runner Jake Evans over to third and Evans scored on Paul Komistek’s grounder to second.