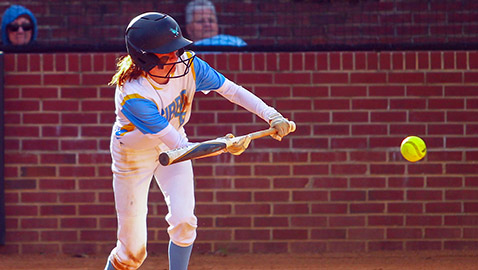 A young and talented Gibbs softball team wiggled out of a first inning jam and faced very little difficulty after that in a 10-0 win over improved Fulton Thursday night in Corryton.

The visitors had a runner on each base with two outs in the top of the first, but freshman lefthander Lacey Keck got Rheagan Thomas to ground out to second baseman Emma Keck – her older sister – to end the Lady Falcons’ early threat.

After that, Lacey got all the way to the fifth inning before losing her first bid at a no-hitter. Makenzie Martin’s single to right field broke it up.

The game was halted in the bottom of the fifth by the 10-run mercy rule as pinch-runner Rheanne Tullock scored on Taylor Selby’s single to shallow left field.

When asked what she felt was the key to the win, longtime Gibbs coach Carol Mitchell said: “We executed the bunt, which seemed to get us going.

“Their pitching is really strong.”

Coming from Mitchell, who was one of Knox County’s best-ever pitchers at Gibbs in the 1980s before going on to Carson-Newman, that is quite a compliment for Lindy Webber, the Lady Falcons’ senior hurler.

Webber, however, didn’t have one of her better games in the circle. She struck out seven, but gave up seven hits – including two right in front of the plate. Gracie Palmer, Gibbs’ clean-up hitter and the only senior in its lineup, turned one of those into a double in a six-run third inning that broke the game open.

“The difference in the game was a lot of errors and I believe we had six on the day,” said Fulton Coach Brian Cochran. “Gibbs put pressure on us with their small game and had us on our heels all game.

“We had a great opportunity in the first inning,” added Cochran. “We had runners on second and third with no outs and we could not execute by putting the ball in play. When you play a team as good as Gibbs, you need to execute when you do get a chance. We simply did not do that.”

Meanwhile, Keck improved her pitching record to 6-2 with her one-hitter. She struck out nine, walked one and hit one batter. Coach Mitchell has been alternating Lacey and junior Abbie Buckner in the circle this season.

Large, Palmer and Emma Keck also each scored a run.

“Gibbs is a very good and fundamental team,” said Coach Cochran. “They have speed and create chaos when they put the ball in play. Their freshman pitcher pitched really well today and kept us off balance, mixing her speeds and pitches. When we did put the ball in play, their defense shut us down.”

Prior to the loss, Fulton had notched some impressive wins this season.

“We have come a long way since we got here three years ago,” said the Fulton coach. “Last year, the girls really bought in and I believe that it showed greatly. This year we have continued to work to get better and we have strengthened our schedule to face some better competition. I hope that playing some tougher teams will help us come tournament time.

“The potential of the program is endless when we show up to play. We preach that we have to play solid games for us to advance.”