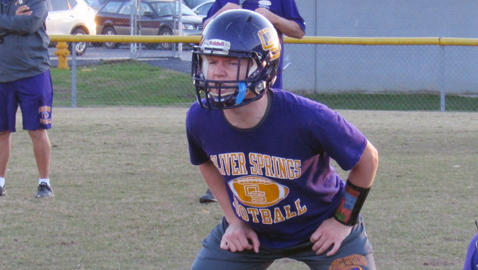 Lane Lee recently finished his sophomore season as an inside linebacker on the Oliver Springs High School football team. Last November, he was still battling leukemia after missing his freshman season with the cancer.

His recovery brought great joy to his family and friends and the entire community of Oliver Springs, which is located just over the hill from Oak Ridge and where three counties – Anderson, Roane and Morgan – come together.

Scenes in a popular movie, October Sky, were filmed in Oliver Springs in 1999 and put the small town on the map for a while. It was a movie about a high school boy from a coal mine town who was so inspired by Russia’s orbiting satellite Sputnik in 1957, he wanted to build rockets himself.

Hollywood could make another movie about Lee’s comeback story. It has been heartwarming and inspirational.

And it has made for a much happier Thanksgiving for many this year.

“Yes sir, I’m grateful for it,” answered Lane when asked how he would respond this Thanksgiving regarding his recovery. “No words can explain it. I’m just grateful.”

Lee and the Bobcats had just finished their final practice session prior to a second-round TSSAA Class 1A playoff game at highly-rated Greenback.

Landon White, a friend of Lane since the first grade, stayed for the brief interview session and shared his feelings about what Lee went through and how it has affected him.

“From a friend’s standpoint, it was one of the worse things you could ever have to look at or go through,” said White, a starting outside linebacker for OS. “Just having somebody who used to be OK and you used to hang out with be in that kind of condition …”

It was hard for Landon to finish putting those feelings into words.

“I just take everything a little bit more into consideration before I do it,” he added, “because you never know who this could happen to next.”

With the sun going down as well as the temperature on this late fall afternoon, Ashley Lee, Lane’s mom, was waiting to take her 15-year-old son home, but she took time to reflect on the past year.

“We’ve went through a rollercoaster of emotions over the last year,” she said. “Lane at this time last year was at his lowest low with the chemo therapy really taking a beating on his body. But then we found out in December that he was cancer free and he was able to return back to school in January.

“He knew that from the minute he was diagnosed with leukemia that he was going to be back out here on this field,” continued Ashley. “He’s very passionate about the game, the love for the team and the love for the sport, so that drove him to fight harder to get better. So, here we are.”

A day probably doesn’t go by that Ashley Lee is not thankful.

“Everyone in our community supported him,” she said. “They prayed for him. I feel like he’s not my son anymore. He belongs to this community.”

Are you going to the game at Greenback?

“I wouldn’t miss it for the world,” she said, her voice filled with joy and anticipation.