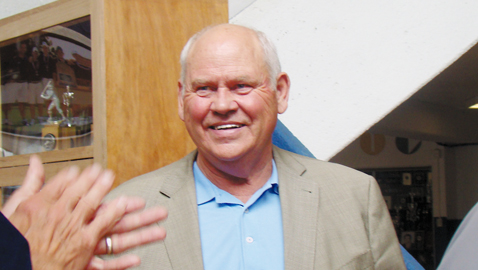 The halls and classrooms were largely empty at Farragut High School last week but teachers and administrators were there. They were preparing to welcome students back today.

But Tuesday afternoon, the teachers addressed a dark issue confronting students in today’s world as they discussed the growing problem of teenage suicide, an issue that has reached epidemic proportions according to former Tennessee football coach Phillip Fulmer.

Fulmer is a national spokesman for the Justin Foundation, a non-profit organization, which was formed to combat teen suicide two decades ago.

“The schools are ground zero when it comes to suicide prevention,” Fulmer told several Knox County teachers at a training session in the Farragut High School auditorium Tuesday. “Teachers, counselors, certainly other students and peers are interacting every day and they know, particularly the peers, when something isn’t particularly right.

“If we can get treatment and intervene and perhaps save a life. That’s what it’s all about.”

The Town of Farragut and Farragut High School has been hit extremely hard by teen suicide in recent months. Three of the school’s students have taken their own life in the last year.

And the one-time Tennessee coach, who guided the Volunteers to the first-ever BCS National Championship in 1998, said that he couldn’t imagine the pain felt by friends and families of suicide victims.

“It’s sad. It’s sad for the community,” Fulmer said. “This is an epidemic. It’s a silent epidemic.

“I don’t know all the details of [what happened at Farragut High], but I can’t even imagine, as a parent, a level of hurt of a lost loved one. It isn’t isolated to the family. It goes throughout the school and throughout the community and the neighborhoods. Everybody is affected.”

Fulmer has been involved in the Jason Foundation since its inception in 1997. The foundation is based in Hendersonville and Fulmer said that working with the foundation is one of the most important tasks that he has undertaken.

“This is very rewarding but I won’t say that it’s happy or pleasant because this is a very subject,” Fulmer said. “We started this at a dining room table and we didn’t have any money.”

Suicide prevention training has been in place in the school system and mandatory for years. Knox County Schools, however, has recently partnered with the Jason Foundation. The foundation provides materials and training for the teachers free of charge,

The training instructs teachers, school employees and students what signs to look for to notice that a student might be in trouble.

Knox County Schools requires its teachers to take a two-hour training course. Superintendent Bob Thomas said that he would participate in the suicide prevention training.

He also noted that the Farragut suicides had an effect on him.

“Anytime we lose a student, it affects you. It affects me,” Thomas said. “For a student to take his or her own life, it’s really the most tragic thing I can think of.

“I can’t imagine, as a parent, what it would be like to have a child who commits suicide.”