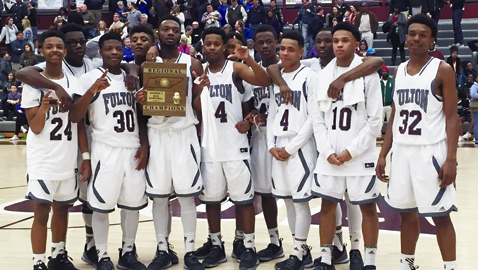 In Thursday night’s Region 2AA Title game at Alcoa, Fulton took CAK’s best counterattack and thwarted a Warrior rally. Withstanding an 18-4 Warrior run in the third quarter, the Falcons picked up their defense in the fourth quarter, and Regional MVP Kentel Williams provided 12 of his 23 points  to give the Falcons the Regional 2AA Title with a 75-62 win over CAK.

Larry Roe had 15 points to assist the Falcons. The Falcons advance to the subs-state round, where they will host Greeneville Monday at 7 p.m. CAK travels to Elizabethton.

“I knew if I got the first one in, I was good,” Roe said of his 3-pointers.  He also mentioned the senior leadership. “Me, Joe, and Kentel are the three leaders of this team,” he said. “So if we can keep them (the rest of the team) calm and everything else, they play good.”

Fulton continued to turn up the defense in the second quarter. The Warriors’ Cole Smith tried to do his part to keep the game from getting too out of hand and had eight points at halftime.

CAK made a move in the third quarter. The Warriors held the Falcons scoreless for nearly three minutes in cutting a 14 point deficit to five. The clock scoreboard went out three different times during the Warriors’ run, including one time for nearly five minutes. The intermittent delays did not seem to affect CAK as they closed the third quarter with an 18-4 run.

However, Fulton’s seniors sparked the Falcons to start pulling away. Williams scored 12 points in the fourth quarter, including a breakaway dunk. Fulton stretched the lead to 15 points before winning 75-62.

After the game, Williams talked about the significance of winning the regional title.

“It means a lot,” he said.  “Knowing we’re about to have home court advantage to play in sub-state, it gives us a lot of momentum. Going into those games, you just feel confident you’re going to win.”

“I thought we came out with a lot of energy and intensity in the first half,” Fulton Head Coach Jody Wright said. “I think we took our foot off the gas,” he said of the third quarter.  “We came out in the third quarter and got up to 20 and we thought it was over. I knew it wasn’t over. I told them at halftime, they’re going to make a run. This game’s going to get down to single digits. And it did. Luckily, we found our sea legs a little bit there and made some stops, got some buckets and held on. I’m proud of our guys for the energy they brought tonight.”