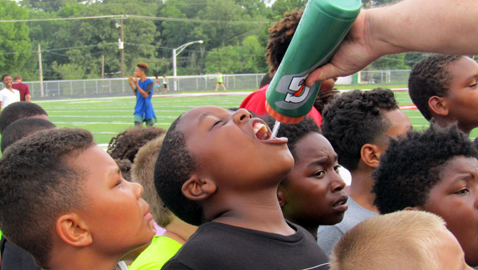 As many as 150 youngsters took part in the annual Fulton Falcons Football Camp June 19 through June 21 at Fulton High’s Bob Black Field and not only did the campers get a taste of football, they also received some valuable messages from guest speakers.

Dominique Williams, who played on Fulton’s 2014 state championship team, spoke Wednesday and pointed out the importance of doing well in school.

Williams, who played last season at Highland (Kan.) Community College, recently committed to the University of Kentucky. He didn’t have the grades to go straight to the Division 1 college level out of high school.

“I played in the little league organization with Fulton and I just want them to stay on their grades and don’t blow their grades off,” said Williams.

“Take school seriously and listen to their parents and coaches because they just want the best for them.

Williams, a cornerback, has one more year of junior college ball at Highland. He plans to sign with Kentucky in December and start school at UK in January.

A lot of last week’s campers could end up playing at Fulton High someday.

“Well, we hope so,” said Coach Black. “This is a community event and we’re hoping that the guys that play in our community growing up end up being with us. And that’s why we do this. They can start learning the way we do things here at Fulton and that way, when they get here, it’s not so brand new to them.”

Black and his assistant coaches conducted the camp, which was free.

Larry Cox, commissioner of the Fulton youth football program, was in attendance at the camp, along with many of the Falcons’ youth coaches.

The camp was being held in memory of #24 Zaevion Dobson, former Fulton High student and athlete who was a fatal victim of gang gun fire as he protected friends in December of 2015.