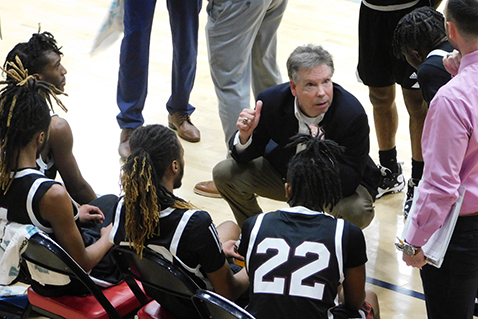 Fulton got back to playing “Fulton basketball” a little better last Thursday night.

Coming off a rare four-game losing streak, the Falcons enjoyed an 80-51 win at South-Doyle.

“I think we played harder tonight,” said veteran coach Jody Wright. “We’ve been struggling with that (as far as) consistent energy, consistent effort.

Fulton, a perennial state power, got off to a 12-0 start this season but ran into some tough opposition during the holidays.

“We lost to A.C. Reynolds at the Coliseum and then we lost two games at the Arby’s,” said Wright.

“We played some extraordinary good basketball teams and hopefully it showed us some areas we have to grown in, so I think there was a little more energy tonight and that was evident in how we played and made some shots. Again, we’ve got to clean some stuff up. But we played hard.”

“Tonight wasn’t our best effort, but it was a step in the right direction,” said Wright. “I’m proud of how hard we played.

Fulton took a 22-13 lead in the opening eight minutes and were ahead 37-23 at halftime. The Falcons continued to increase their margin and it was 56-37 early in the third period and 60-40 with six minutes left in the game.

Reserves got in some playing time before the final buzzer.

The Cherokees were led by Tai Cates (21 points) and Nate Thompson (10).

“I thought we had a lot of guys that impacted the game – not necessarily scorebook-wise – and that’s what you got to have,” added Coach Wright. “There’s going to be nights you don’t score a lot and I was pleased with the guys that changed the game with other facets besides scoring and that’s what good teams do.”