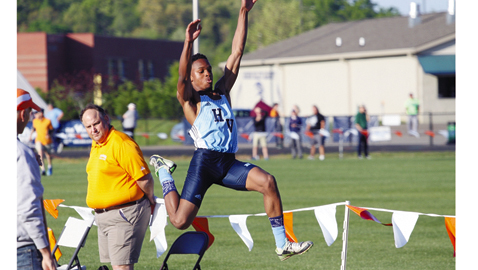 On a night when the weather felt more like football season, four members of Fulton High’s 2014 state football championship team combined to win the 4×100 relay event in the Knoxville Interscholastic League Track and Field Meet April 28.

Juniors Kentel Williams and De’Ontay Tate and senior Dominque Williams ran the first three legs as the Falcons were timed in 43.48 seconds.

Dobson, who said he was moved into the anchor position after he defeated Domonique in a 100-meter race at West this season, described how the race went and how he got the baton with the lead.

“Kentel gave us a great start and caught two guys,” said Zack. “De’Ontay got the baton and it was a perfect handoff and he was gone. Dom just caught everyone in the curve and gave it to me. Dom said, ‘Bring it home, Zack.’

“Yes, I really could hear him, and I brought it home.”

Nashville Pearl Cohn has the state’s top Class A-AA time in the event this season, a 42.83

The versatile Dobson also placed fourth in the KIL 100, second in the triple jump and eighth in the long jump under the watchful eye of “my No. 1 fan,” his mom, Zenobia Dobson.

Homestanding Hardin Valley Academy capped its third KIL boys team title for third year in a row when its 4×400 relay team of junior Robert Taylor and seniors Weldon Wright, Dartanian Oakley and Jose Parrilla won the meet’s final race in a time of 3:27.42.

Wright also helped the Hawks get off to a good start in the field event competition by winning the long jump in 22-2½ and the triple jump in 45-8½.

Halls’ Cole Patterson turned in a winning effort of 56-6 in the shot put. Freshman Joshua Sobota of Bearden won the discus with a 139-0 throw.

Rhett Elwood of Grace Christian Academy, 2014 Class A-AA state discus champion, felt something pop in his shoulder on his first throw in the shot put, said Coach Mike Barlow, and was pulled out of remaining competition as a precaution.

COMING UP:  Qualifying for the TSSAA state meet starts this week. The Class A-AA Sub-Sectional is Thursday (May 7) at CAK and the Class AAA Section 1 Sectional is Saturday (May 9) at Hardin Valley.

The Class A-AA East Sectional meet will be May 14 at CAK.

The state meet is slated for May 20-22 in Murfreesboro.