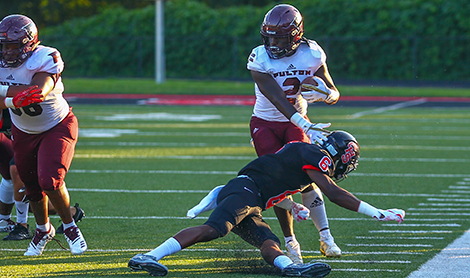 In a physical battle of defenses, Fulton’s was slightly better Thursday night in the “Battle of Broadway” at Central High School. Fulton’s DaShaun McKinney intercepted a tipped pass and returned it 81 yards for a touchdown and a two score lead late in the third quarter. The interception sparked the Falcons to a 18-9 win over the Bobcats.

“It was a high ball,” McKinney said. “Linebacker came out and hit the receiver and tipped in my hand, and I caught it, spinned out, took off.”

Both offenses struggled in the first half. Fulton had just seven yards rushing and 51 total yards. Central had 16 total yards. Indeed, the only score of the first half came on a 27-yard field goal by Bobcats’ kicker Jarred Swislosky.

Before McKinney’s interception, Fulton had squandered good field position in the first half. The Falcons made it inside Bobcats’ territory five times in the first half but came away with no points.

“You know they got a lot of guys everywhere,” Central Head Coach Bryson Rosser said of Fulton’s talent. “We just put our kids in a great position. And they made plays time and time again.  I’m extremely ecstatic about the progression of our team.”

The Falcons took a 6-3 lead with 3:02 left in the third quarter on quarterback Xavier Malone’s 3-yard touchdown pass to JaShaun Fenderson. The Bobcats blocked the extra point.

Central drove the ball to the Falcon 19-yard line when McKinney made his big interception return for a touchdown and a 12-3 Falcon lead.

However, the Bobcats responded by driving for a touchdown. Wide receiver Braden Gaston took a direct snap and scored on a 1-yard touchdown run on 4th and goal. Central missed the extra point but cut the Falcons’ lead to 12-9 with 8:35 left in the fourth quarter.

Aided by a pass interference penalty on Central, Fulton drove the ball to the 47-yard line. Malone fired a bomb to a streaking Fenderson, who got behind the defense for a 53-yard touchdown pass. The score sealed the win for the Falcons and put them up 18-9.

“I threw it to him and let my guy be a player and go get the ball,” Malone said of his touchdown pass to Fenderson.

For the game, the offensive numbers were woeful for both teams. Fulton had 210 total yards to Central’s 209 total yards. Central had 33 yards rushing to 83 yards for Fulton. Both teams combined for 17 penalties, and Central threw two interceptions.

“We love the atmosphere,” Rosser said of the Battle of Broadway. “The pride is back in Fountain City.”