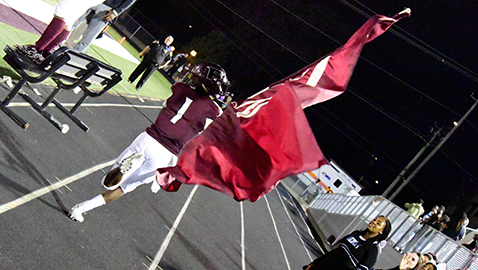 Fulton had two offensive starters unavailable for its Region 3-5A game against Karns Friday night, but the Falcons didn’t slow down at all.

In fact, Marcellus Jackson, Fulton’s speedy sophomore running back, picked up the big Falcon flag after the game was over and started running down the track with it in front of the fans in celebration.

Marcellus had a lot to celebrate too as he scored three touchdowns in Fulton’s 47-7 win over the Beavers at Bob Black Field.

“It’s good to see these guys experience success and have a good time with it,” said Fulton Coach Rob Black.

It was the second straight victory for the Falcons (1-1, 2-3) after starting the season with three losses. The loss left Karns 0-3 in region play and 0-4 overall.

“I felt like we’ve played hard all year long, but sometimes you play hard, but you make a ton of mistakes,” said Coach Black. “Now we’re starting to play hard and play right and it shows up when you do that.

“We’ve just got to continue to get better every week.”

The Beavers will play at Campbell County in this week’s Rivalry Thursday TV game, while Fulton will have the week off before hosting top-rated Maryville Oct. 2.

“I don’t feel like we got our team ready to play very well,” said Karns Coach Brad Taylor after the game. “I don’t think I did a very good job tonight, getting us prepared to play a football game. I think they were much more ready to play than we were. Their readiness and aggressiveness was a big difference.

“They’ve got some good team speed for sure,” added Taylor. “They have several good football players. They have some good linemen on both sides of the ball up front too.”

Marcellus had touchdown runs of 11 and 10 yards in the opening quarter and added a 33-yarder for six more points in the final period. The 5-10, 171-pounder finished with 115 yards rushing on eight carries.

Karns’ best offensive weapon, sophomore running back Desean Bishop, had an 81-yard catch and run for the Beavers’ lone score of the game with 9:04 on the second quarter clock. He pulled in the pass from quarterback Walker Lockhart in the right flat and took off. Jace Harvey added the PAT kick.

Bishop totaled 61 yards on the ground in 19 attempts.

Fulton responded with Adrian Roberson pulling in a 22-yard pass from junior quarterback Raysean Jackson for a touchdown despite pass interference (holding) on the defense to make it 20-7.

Tackles for loss by Shenault and Kennan Vaughn backed the Beavers up to their 9-yard line and forced a punt. With good field position, Shenault capped a short drive from inside the 1. Joseph Mojica added his third PAT kick for a 27-7 halftime advantage.

Roberson had a pick six on the corner to start the third quarter and it was quickly 34-7.

After Marcellus’ third TD of the night, Shenault added the final touchdown with a determined 25-yard run. He broke two tackles in the last 10 yards to reach paydirt.

Often during the contest, Fulton’s defense was just as impressive as its offense. The PA guy recognized the “Vaughn brothers” on Karns’ first offensive possession as Seth and Keenan combined for a four-yard tackle for loss to force a punt.

Linebacker Jerrison Gibson and end Keenan Vaughn led the Falcons in total tackles with nine apiece. Gibson was in on at least two TFLs and returned an interception to set up the last TD.

Defensive linemen Bill Anderson (6-3, 277) and Seth Vaughn were each in on six tackles and Anderson turned one Karns double reverse into a six-yard loss.

Roberson had two TFLs in addition to his two scoring plays.