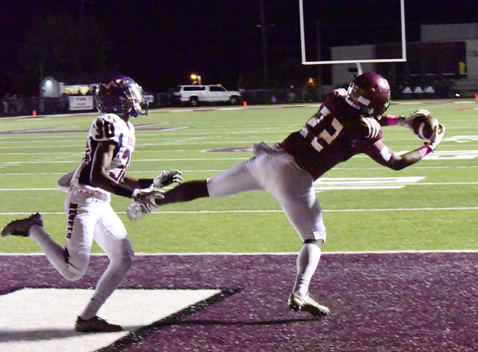 Junior quarterback Xavier Malone and a pack of talented receivers propelled the Falcons to a 41-14 win over West, a Region 3-5A foe known for its defense.

The air strike produced 328 yards in the first half alone.

Malone, listed at 6-3, 207 pounds, finished with 28 completions in 39 attempts for 369 yards and three touchdowns before reserves mopped up in the final six minutes at Bob Black Field.

Senior Coryean Davis led the receiving corps with 11 catches for 157 yards and one touchdown. Senior teammate Joey Smith contributed eight receptions for 79 yards. Do-it-all junior Jashaun Fenderson had only three snags for 53 yards, but two of them were good for TDs.

The victory lifted Fulton to 5-0 in the region and 8-1 overall and set up a title showdown at home this Friday night against Oak Ridge (5-0, 7-2). The Wildcats tuned up for the big game with a 42-7 win at Powell.

“I can’t say enough about our quarterback,” said Fulton Head Coach Rob Black. “He set in there and threw some balls knowing he was going to get hit, and that takes some courage. He delivered some great balls for us tonight.”

Coach Black also commented on his team’s depth at the receiver position.

“We’ve got so many guys that can make plays,” he said. “I think that makes it hard to defend us. And on top of that, those guys are great blockers, they’re unselfish, they’re pulling for each other. That’s something special we have.”

West Coach Lamar Brown said his team had a couple of uncharacteristic turnovers early (fumble recoveries by the Falcons’ Demarcus Cash) that put the Rebels in a hole.

“But credit has to go to Fulton,” said Brown. “When we turned the ball over, they took advantage of it. Their skill people made plays all night long and went up and got the football. My hat’s off to them. Robbie Black and his staff do a great job with those athletes.”

After losing a fumble (recovery by the Rebels’ Cirus Howell) and failing to take advantage of a West turnover on its first two possessions, Fulton got going. Malone hit Fenderson with a 22-yard TD pass over the middle for the game’s initial points with 6:22 on the first quarter clock. The left-footed Fenderson added the first of five PATs.

Then came Xavier’s 42-yard pass to Smith deep down the right sideline that set up a 9-yard scoring run by senior Dorian Williamson at 3:16.

The Fulton defense pressured West quarterback Myles Everson and forced a three-and-out, allowing the Falcons to put up another score before the quarter ended.

It came on one of the best catches of the game. Malone’s pass to Davis appeared to be out of reach, but he pulled it in for a 26-yard completion and six more points to make it 20-0.

After a scoreless second quarter, an errant snap in a punting situation caused a four-yard loss and set up West at the Fulton 11-yard line. Senior running back Trariq Hardin bounced outside and scored from the 3. Logan Bowers’ kick cut the deficit to 20-7.

That got the Falcons going again.

Fulton restored order by driving 80 yards in nine plays. Determined running by Williamson produced back-to-back gains of 20 and 25 yards. Fenderson capped the march by hauling in an 11-yard pass from Malone to make it 27-7 with 7:14 to go in third quarter.

West failed to answer and Fenderson’s 50-yard punt return made it 34-7.

Robquan Thomas intercepted Everson’s ensuing first down pass and returned it to the West 13. The Falcons, however, couldn’t cash this time as low snaps and a personal foul penalty backed them up. Demarcus Nelson intercepted Malone’s third-and-goal pass from the 23.

Thomas weaved his way for a 55-yard touchdown run to complete Fulton’s scoring with 7:30 left in the game.

Despite the win, holding penalties were costly for Fulton as Williamson had a 75-yard TD punt return early in the second quarter nullified and a 69-yard TD run from scrimmage midway through the fourth quarter erased.

West lost standout nose guard Zach Stokes and Stokes’ backup, Alijah Fraley, to injury in the first half, but Coach Brown said after the game both should be okay, along with Hardin, who left the game with an injury in the final quarter.

West will close out regular season play by hosting Campbell County in a region game this week.