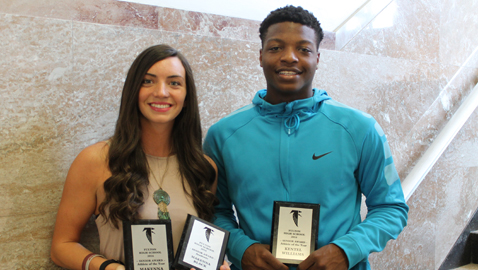 This spring, however, she was on the receiving end of the cheers as a leading player on the Lady Falcons’ softball team.

For her contributions and talents as a cheerleader and softball player, Makenna was named FHS’ female Student-Athlete of the Year, according to Jody Wright, the school’s athletic director.

In softball, the left-handed hitting senior led the team in batting average, defended in centerfield and was all-district.

Makenna’s dad is Rob Black, the school’s head football coach. He also went to Fulton and was recognized as a high school Athlete of the Year in 1984. Makenna’s mom, Michelle, also was a cheerleader at Fulton.

Makenna followed in their footsteps.

“I feel blessed to have been able to follow my parents’ footsteps,” she said via e-mail. “It has been a pleasure to compete as a Falcon these past four years just as my parents did. Since I came into this world as a Falcon, I graduated as a Falcon, and my dad is a coach for the Falcons—I am a Falcon for life.”

Makenna said she also was blessed to be able to cheer for a state championship team each of her four years at Fulton – three times in football and this past winter in basketball.

“Playing softball brought many new friendships throughout high school, and it was an amazing journey to help turn my softball program around and improve as a team,” she said.

“Both are very different,” she said. “Cheering for football and basketball is a great way to get involved in the programs as well as help enhance the student body’s school spirit. Playing softball is a little different than cheering as it is more of a competitive sport, and it was awesome to have some success this year knowing that we had people cheering for us.”

Makenna will start at UT in the nursing program this fall and she hopes to obtain a degree and become a physician’s assistant in the future.

Kentel Williams was selected Fulton’s male Student-Athlete of the Year. He lettered in football, basketball and track and was all-state in football and basketball his junior and senior years. He also was a point guard on the Falcons’ Class AA state champion basketball team in March.

“Kentel was a fabulous athlete that excelled in all sports,” said Wright, who also is the school’s head basketball coach. “He was fun to watch play and a joy to coach.”

Skvara, a linebacker for the Rebels, tweeted in May that he would be signing to play football at Sewanee. He also was named to the All-District 4-AAA baseball team this season.