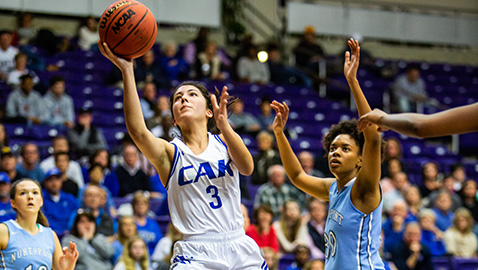 The Christian Academy of Knoxville girls picked up the slack for their ailing leader.

“Tonight was a whole team effort,” said CAK Coach Abby Williams. “Claire had been sick all night and morning, and did more than I expected of her today. We weren’t sure she would even play a minute. Ellie stepped up and understood what her team needed from her and she delivered.”

Fussell scored a team-high 16 points and hit 9 of 11 free throws at Lipscomb University’s Allen Arena. Caroline Meyers contributed 13 points on 5 of 7 shooting from the field and collected five rebounds.

“Caroline had one of the best games I’ve seen from her,” said Williams. “She was the spark we needed on both ends of the floor and dominated inside.”

The Lady Warriors made just 1 of 7 attempts behind the arc but sank 14 of 19 foul shots.

Amara McKay stood out for the Lady Trojans (26-8) with 20 points, making 9 of 13 field goal attempts. Northpoint, however, made only 2 of 6 free throws.

The contest was tied 29-all heading into the fourth period. Mackenna Mozingo’s layup with 7:41 on the clock gave CAK the lead.

The Lady Warriors kept the lead but saw Northpoint cut the deficit to two on a jumper by McKay with 2:49 to go.

CAK responded with a game-deciding six-point run as Smith hit a jumper, Meyers a layup and Fussell two free throws. That gave the Lady Warriors an eight point command (45-37) with only 44 seconds left.

“It has been an unbelievable season and we are hoping to make history by bringing home a state championship Saturday,” said Williams, who is in her first season as head coach at CAK.

The Lady Warriors lost in the semifinals in 2013, their only other state tourney appearance.