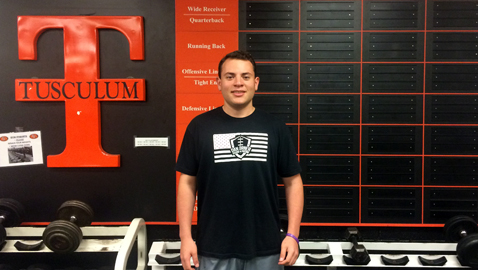 Isaac Gallegos said his No. 1 goal this football season is to win the starting job as place-kicker at Tusculum College.

“They recruited some talented kickers and I’m looking forward to competing,” said the former Christian Academy of Knoxville player via e-mail last week.

Gallegos, who planned to leave this past Saturday for Greeneville to join Head Coach Jerry Odom and the Pioneers’ squad, could include himself among those talented kickers.

In his senior year at CAK, he converted 9 of 10 field goal attempts and had a 63 percent touchback percentage as he earned All-Region Class 3A recognition.

At the 2017 Kohls Kicking Senior Challenge, which was held in Atlanta in January, Gallegos charted 9/10 for field goals, including two 55-yarders, which put him in the finals with over 150 other nationally ranked kickers. He also averaged 65 yards on kickoffs.

Gallegos, a 4.5 star place-kicker, ranked in the top 25 percent of all high school kickers in the nation by Kohls Kicking.

“Isaac is one of the hardest working players I’ve been around,” said CAK Head Coach Travis Mozingo. “His dedication to his ‘craft’ is second to none. The fact that he earned a spot with Tusculum is no surprise to me. It’s a result of his commitment to maximizing his potential as a kicker.”

Gallegos has been working all summer in Knoxville to get ready.

“The trainer sent me the summer lifting and conditioning program and I’ve been doing that all summer, as well as kicking with my coaches – Coach Dan Orner and Coach Dan Cimaglia. I would not be where I am without them.

“At this point it is an open race,” continued Gallegos. “I will not know where I stand until I get up there and start competing.

“I’m looking forward to meeting the team and getting on campus.”

Isaac already likes what he has seen of Tusculum and Greeneville.

Gallegos grew up in Knoxville and attended CAK throughout high school. He started attending CAK in the sixth grade.

Like many kickers do, Isaac got into the sport of football from playing soccer.

“Yes, I grew up loving soccer and still love it. It will always be a part of me.”

Gallegos plans to have a double major in Business Administration and Finance.

“My ultimate goal is to be a sports agent,” he said. “I also own my own business (ILG Lawn Care and Landscaping) and look forward to growing it.”